Hurricane Help for the Long Haul
At the Shuttle Landing Facility of NASA's Kennedy Space Center in Florida, a small group of workers squinted into the blazing-hot afternoon sky as they awaited a landing. 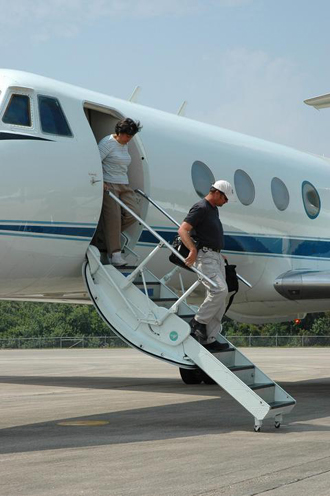 But this wasn't the end of a space mission; it was the end of a relief mission. The roar of the engines announced the arrival of a NASA Gulfstream returning from the storm-ravaged Gulf Coast Sept. 14. Onboard the plane that had just delivered supplies and additional personnel to help the victims of Hurricane Katrina were four Kennedy employees coming home from their work in the disaster zone.

Floridians know hurricanes all too well, and the multiple punches dealt to the state during the 2004 hurricane season makes its residents especially sensitive to the many needs during storm recovery. But even last year's storm experience couldn't prepare these workers for what they witnessed in Katrina's wake: complete destruction.

"Those folks are going to need our support for many, many years," said returning security agent Linda Maust. "There are towns there that are total, total devastation." She admires the dedication she witnessed among her fellow space workers who remained devoted to their recovery tasks despite their overwhelming personal losses.

The returning Kennedy security and medical staff spent long days working at the Stennis Space Center in Mississippi and Michoud Assembly Facility near New Orleans, both hit hard by the storm. 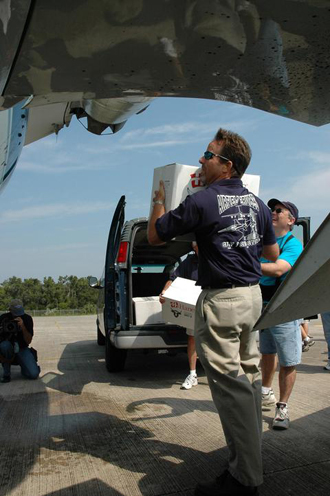 Dr. Violette Salib and Employee Assistance Administrator Patti Bell, both of Kennedy's Occupational Health Facility, were based at the clinic at Stennis, where their priorities included giving immunizations for tetanus and hepatitis and helping workers cope with the pressures of their relief efforts.

When asked what lessons Kennedy personnel could take from what she'd witnessed in the hurricane's aftermath, Dr. Salib could sum it up in one word: "Evacuate."


Earlier in the day, the plane left Kennedy carrying the latest shipment of supplies -- including vital electrical equipment -- and two NASA security agents to replace the returning agents. The electrical components, in high demand in the disaster area, will be used to help restore power at Michoud. The remainder of the plane's cargo consisted of 17 boxes of medical supplies, clothing and everyday necessities that are in short supply in the region.

But this shipment was not the first. The flow of help from Kennedy began soon after the storm, in the form of personnel, emergency equipment, food, medical supplies, fuel and generators. Overseeing the effort is Wayne M. Kee, emergency preparedness officer at Kennedy, who accompanied the personnel and supplies on the trip to Stennis. 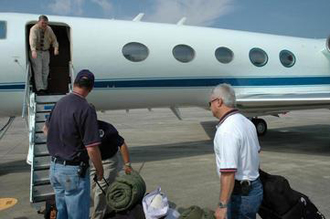 "When we have an event like this happen, it doesn't matter which center it happens at -- all 10 centers step up," said Kee. "It's a team effort. We're doing our best to get our brothers and sisters back up into operation."

Image at Left: Security agents head to the disaster zone to replace those returning to Florida after helping fellow workers at Michoud and Stennis. Image credit: NASA/Kennedy