NASA Employees Provide Assistance to Hurricane-Ravaged Areas
NASA centers throughout the Nation delivered supplies to hurricane-ravaged areas, as part of continuing rescue efforts in the aftermath of Hurricane Katrina. NASA’s Stennis Space Center near Gulfport, Miss., as well as the Michoud Assembly Facility near New Orleans, La., were hard hit by the hurricane. 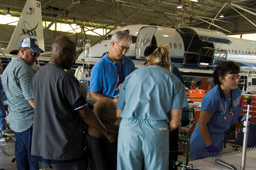 Image to left: NASA's Johnson Space Center Aircraft Operations Hangar 990 at Ellington Field, Houston, is being used as a triage location for medical patients evacuated by air from New Orleans on their way to Houston-area medical facilities. Credit: NASA

In the aftermath of the storm, NASA employees have helped those affected by Hurricane Katrina in a variety of ways. More than 350 employees of NASA's Johnson Space Center (JSC) volunteered space in their homes to house NASA and contractor workers who have been displaced by the storm.

Aircraft Operations at JSC continues to provide assistance to the Veterans' Administration and other agencies with evacuation of patients from the storm-ravaged areas. In addition, NASA's aircraft Hangar 990 at Ellington Field in Houston is being used as a triage location for patients evacuated by air and awaiting ground transportation to Houston-area medical facilities.

The Glenn Research Center (GRC) negotiated with Ports Petroleum, a local vendor, to deliver high sulfur diesel fuel to Stennis, including 7,800 gallons due on Sept. 7. GRC also has security personnel on stand-by, who will travel to Stennis, if necessary.

The Kennedy Space Center (KSC) coordinated the delivery of medical supplies to Stennis. Since Michoud can only be accessed by air, a helicopter and personnel from KSC will remain at Stennis to help with the transportation of people and cargo to and from Michoud. KSC staff also is in the process of arranging the delivery of medical supplies, food, diesel fuel, and generators. In addition, two high voltage technicians are scheduled to be on hand to ensure Michoud can safely receive power when the main electricity grid comes online. In the coming week, a 14-person KSC security team will leave for Michoud to relieve the security professionals at that location.

Nine members of the Ames Research Center’s Disaster Assistance and Rescue Team (DART) are deployed to relief efforts, and as many as 50 additional DART members are available to be deployed, upon the request of Federal Emergency Management Agency (FEMA) officials.

An emergency operations center at JSC is taking calls from NASA coworkers in those areas seeking shelter and coordinating their placement with Johnson Space Center employees and in homes of workers at other NASA centers around the country.

NASA has designated a telephone number (256/544-4700) for family members seeking information about people who may have sought shelter from Hurricane Katrina at Stennis Space Center and Michoud Assembly Facility. NASA also is taking e-mail inquiries about personnel sheltering at Stennis and Michoud. Use "Assistance – Katrina" in the subject line, and send e-mail inquiries to: public-inquiries@hq.nasa.gov.

In addition, NASA has established a toll-free number (888/362-4323) for recorded updates about general conditions at Stennis and Michoud.

For updates about relief operations on the Web, visit: http://www.nasa.gov/hurricane.