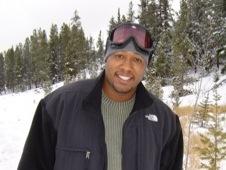 Franklin was born and raised in Baltimore, Maryland. He graduated from Baltimore City College High School in 1989 and received his BA in Public Relations from Hampton University in southeastern Virginia in 1993.

Back in the day, Franklin served in the Marine Corps Reserve for eight years.

After graduation, he held several jobs but found his footing in news as an associate producer, editor and a television news photographer.

After a few years in news, Franklin landed at the NASA Langley Research Center in Hampton, Virginia. In July 2006, Franklin became an entrepreneur when he started a video production company called Clear View Digital Media, LLC.

Franklin is happily married and living in Hampton, Va., with his lovely wife and stepson.

His future plans include growing his business to include a still photography studio and having children.