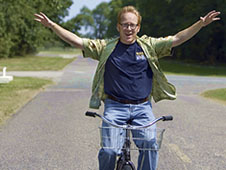 Blair Allen defines the role of "Outsider." His career began at a very early age when he decided to play Stanley Kowalski in his preschool presentation of "A Streetcar Named Desire" as a Harvard trained Speech Pathologist. Despite mixed reviews, he continued his maverick ways through high school and college. Finding new and uncanny ways not to fit in, he was rejected by almost every group, club and organization in his path.

As fate would have it, Blair eventually participated in a focus group to determine the public's knowledge of the nation's space agency, NASA. After demonstrating a profound lack of even the most basic NASA facts, Blair became the poster boy for NASA outreach. If NASA could inform Blair, the public would bubble over with information on NASA programs.

After six years of intense work, NASA turned to former educator and triathlete, Chris Giersch and cameraman/director turned Set Therapist, Ron Beard. Together the two professionals forged a strong relationship and commitment to teach Blair all about NASA. Using the thinly thought out pretense of a video podcast, they began their work. Surprisingly, 18 months later, they began to see some progress. As a result of a lost bet, they decided to turn their therapeutic fictionalized show into a reality.

As always, Blair continues to be an outsider on the show. In fact, he believes the show is in its fifth year and frequently refers to events that have never taken place in reality.
› Back To Top