Note: if you're using Quicktime 10 (Mac OSX Snow Leopard) closed captioning is already available. 1. After downloading the vodcast, locate the downloaded file on your computer. Your file should have an .mp4 extension and include "NE00110711_at33_MMS" in the name. Please note that our example file name is generic. 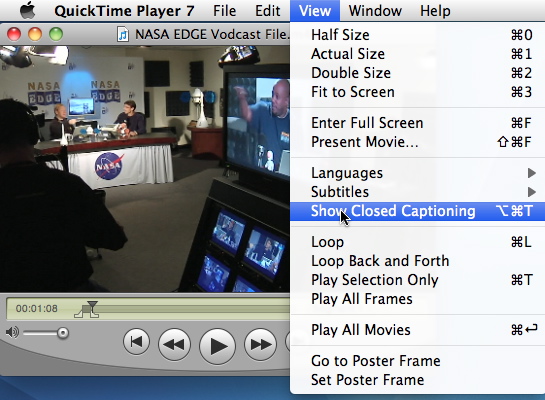 NASA is expecting quadruplets! In the form of four identical satellites designed to fly in formation in the Earth's magnetosphere to study our magnetosphere and it's effect on the planet. Dr. Tom Moore (MMS Project Scientist,) Gary Davis (Spacecraft Engineer) and David Richardson (Facility Project Manager) discuss this unique mission and the facilities necessary to deliver the hardware. Of course, a side benefit may be the creation of an actual magnetospherence scale to help identify how we can prepare for and survive space weather events!

JACKY: An inside and outside look…

FRANKLIN: At all things NASA.

FRANKLIN: An inside and outside look at all things NASA.

FRANKLIN: But what we like to call the Mission to Study Magnetospherence.

BLAIR: Thanks for the endorsement. Ordinarily, when we cover a mission, we’re there right up against the launch date. In this case, we’re getting in on the ground floor and early stages of the mission.

FRANKLIN: When we got here, I had the opportunity to talk with Tom Moore who is the Project Scientist for MMS.

FRANKLIN: Tom, talk to me a little about what MMS is all about?

FRANKLIN: In the area where this takes place, it’s called reconnection?

TOM: The process is called reconnection. It goes on in two places. One on the dayside of the earth where the solar wind first encounters the earth. Then the field lines move around, plasma moves around to the downstream side on the night and has to disconnect. You get a connection and then disconnection; both of them are reconnection.

BLAIR: Why in the world would you put together a fleet of four? It seems pretty complex to put together one satellite but why four?

FRANKLIN: What are the objectives of studying this part of the magnetosphere?

TOM: We really want to get an understanding of the reconnection process. That’s what’s going on in there, and how does it then transfer energy into the earth’s magnetosphere, causing all the space weather effects it causes.

FRANKLIN: And that is when we have issues like cell phone disturbance, satellites…

TOM: GPS indications get confused at best. You get people that are traveling on trans-polar cap flights suffer radiation exposure because of energetic particles coming from the sun. You’ll have currents induced in power lines on the surface of the earth that can trip circuit breakers and shut down power, so lots of effects.

BLAIR: This is an impressive space. It’s very bright. I can see a lot of good work being done here obviously but what are some of the new things that you have employed here in this clean room that MMS might take advantage of?

DAVID: It’s a traditional class, 10,000-clean room. So, that means there’s no more than 10,000 particles half a micron size or larger within a cubic foot of air. That’s a standard requirement for an integration operation. What we added to this is an energy saving feature, which most clean rooms wouldn’t look at. Performance of the clean room is very important. It’s the paramount importance. You’d like to be able to save some energy because a clean room is really energy intensive. This clean room has the capacity to spin down to about half speed when the occupancy is not that big. We’re going to use particle counters to find out when the room is clean enough to turn the fans down. Similarly, the lights, themselves, will come down to about a 60% lighting level. You need to maintain temperature. You need to maintain humidity but there’s really no need to circulate that much air in a low load condition. We’re going to be able to save about 30% of the system’s full capacity and energy use when we’re in an off cycle. That could save the center about $60,000 a year just in energy consumption alone.

DAVID: Yeah, primary pieces of hardware will come in and out of here. An important cleanliness requirement for a clean room is that any time you have a large opening your air escapes. It brings the pressure way down. It exposes you to contaminate. We’ve got a special door that can open and close in about 5 seconds. A standard roll up door would take about 35 seconds but that door will go up and down really fast.

DAVID: Yeah. It would really, really shock you. Another feature to this, outside where this door rolls up, it will spiral in on itself but it won’t press face to face. One of the concerns that you have with contamination, if I roll that door up and that face of the clean room touches the outer surface of the clean room like a normal roll up door, you contaminate it. That door has the ability to spiral up and not touch surface to surface. It’s a very special door.

BLAIR: That’s awesome. What are the orange pipes on the wall near the airflow?

DAVID: Very early. There are little holes in the PVC and it will pump some of the air from here to a sensory unit. The sensitivity of that system is such that it can detect a smoldering PC board two days before it even fails.

BLAIR: So, if one of the instruments on the satellite or any satellite for that matter is having some potential problems, heating up irregularly, this system, before it fries, will let you know?

BLAIR: That’s very good. You always want to protect you’re instruments when you can.

FRANKLIN: Just like an aircraft will fly through the eye of a hurricane, MMS is doing the same in the magnetosphere?

BLAIR: You use GPS but how do you us GPS in space to maintain your proper location?

GARY: That’s a good question. GPS, most folks are familiar with, tells you where you are in your car or on your cell phone. The GPS constellation of satellites points down towards the earth, so it works on earth as you’re driving around. But in space, we will be flying above that constellation. So, we have a very sensitive receiver that…

GARY: Exactly. It can pick up our route and recalculate us and tell us where the spacecraft are.

COMPUTER VOICE: Turn around when possible.

BLAIR: Okay, so these aren’t fire and forget satellites. You’ll actually, during the mission, have folks here on the ground that are sending commands to correct trajectory, or orbit, or things like that?

GARY: Yes. Periodically, we’ll need to adjust the formation. Also, the scientists have input because they might want to look at phenomena that are very close together or very far apart. So they will tell us we need a formation of such and such a size, so we will adjust the spacecraft to get to the size that they want. When the storm passes through us, it won’t move us around like a storm would move ships or aircraft around but what really moves us is the orbital mechanics of the earth and the moon. So, we need to track our orbits very carefully and do maneuvers ahead of time so when we get into the storm region we’re just in the right place and the right formation.

BLAIR: You’re not following a strict flight plan the whole time. That would be the easiest way to stay in formation, right?

GARY: Right. Well, imagine we’re going in an orbit shaped like an egg and at a certain point of space that’s where the scientist think the storms are going to happen. As we fly through that region, that’s where we want to be in formation. What we will do is track all the spacecraft so we know where they are and then do maneuvers with our thrusters so when we hit that point in space we’re exactly where the scientists want us to be.

BLAIR: So, right during the storm you’ll open up the X-wing so to speak?

BLAIR: But not in attack mode but in science mode.

BLAIR: How long is the process from bare bones to being totally outfitted?

GARY: I would say about a year and a half to get all the pieces together assuming that all the pieces come in at the right time. Sometimes, for whatever reason, something is late and we might have to wait to put on that piece.

BLAIR: I hate going to the spacecraft store and finding out the one thing I need…

GARY: It’s tough and it’s not on sale at that time either.

BLAIR: That’s right. Sixty days same as cash. You’ve got to look for the right deal. Thanks so much. I appreciate it.

BLAIR: We look forward to finding out more about MMS 1, 2, 3, & 4. I really want to purpose incorporating magnetospherence into this whole mission. Maybe we can develop a magnetospherence scale.

FRANKLIN: I had a great time here at the Goddard Space Flight Center.

BLAIR: Yeah, and the next time we see this clean room it will be full of people in bunny suits, spacecraft, instruments, the works.

FRANKLIN: And we’ll also talk to engineers and scientists about their preparations for the MMS launch.

BLAIR: So, stay tuned as we continue to provide coverage for The Mission to Study Magnetospherence.

FRANKLIN: You’re going to stick with that, huh?

BLAIR: An inside and outside look at all things NASA. Why wouldn’t I stick with it? It’s magnetospherence. It’s perfect.

BLAIR: I’m dying to get under there.

GARY: Yeah, go ahead and get on your back and skirt through there.

GARY: As you get up, watch your head because these are very delicate.

BLAIR: Are we both able to get up?

GARY: Just watch your head when you kneel up.

GARY: Um, try not to bang your back on those things as you stand up.

GARY: You okay? All right, just be real careful when you get down off the stool that you don’t bang into anything.

BLAIR: That wasn’t me by the way folks. Just so you know.