IT Came From Vesta

IT Came From Vesta
› Play Podcast 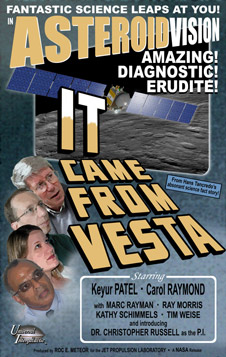 Detective: Dr. Raymond, you in there?

Detective (aside): to anyone out there - in the time I have left, I will try to tell you all I know about their arrival...

Detective: Mr. Patel – you there?

Detective (aside): their infiltration began - like so many others…

Detective (aside): their trail of smoke and flame did not go unnoticed. Two Australian station workers, heroes I call 'em, just going about their buesiness, they saw 'em come down.

Detective (aside): the station workers did not know the import of their detection, so nobody looked for nothing. It would be ten years before anybody realized –

Patel: Did you say Eucrites?

RAYMOND: This may shock you, but there are Eucrites all are over the planet.

Agle: That version of "IT came from Vesta" is our salute to science fiction. That being said, you may find the science reality of meteorites – and Eucrite meteorites in particular - just as intriguing…

Agle: I'm DC Agle of the Jet Propulsion Lab. And here to discuss Eucrites and the mission that will explore them we have with us today: NASA's Dawn mission Project Manager Keyur Patel…

Agle: First off - where did Eucrites come from?

Patel: Well, they come from Vesta. It's the second largest body in the asteroid belt. It's a 330-mile-wide space rock, and it has a 285-mile-wide crater on it.

Raymond: and that crater - that's the smoking gun

Agle: there are a lot of big craters out there in the solar system. So what makes this one on Vesta so special?

Raymond: It's special because that's where th Eucrites came from. Eucrites formed in the interior of Vesta as melted rock that rose and flowed across the surface. And then they were expelled from the surface during a huge cataclysmic collision that released more energy than any weapon ever devised by man -- and that sent about one percent of the volume of Vesta out into the asteroid belt.

Agle: So Eucrites are out there in the asteroid belt. How did they get from there to Earth?

Patel: Well you have to thank massive jupiter for that. There is a gap in the asteroid belt where objects floating around can be greatly affected by jupiter's gravity.

Raymond: And then over time Jupiter's gravitational tugging sends some of that material, those Eucrites, on a path that crosses the earth's orbit.

Agle: So we have a huge deep space blast… millions maybe billions of years on a multi-billion mile trip and then a plunge into Earth's atmosphere

Agle: that is a great story but how can we prove it?

Agle: So that story about the Australians who saw the Eucrites fall, that is actually true?

Raymond: Yes, to my knowledge the only identified case where somebody has seen a eucrite falling to Earth.

Agle: Are the eucrite meteorites found only in Australia?

Raymond: No, they have been found in Antacrtica and Canada and all over the planet.

Agle: The Eucrites came here. Are we ever going there?

Patel: Yes we are. We are going to do that with the Dawn mission which was launched on Sept. 27,2007. It's going to go to Vesta first. It's going to arrive there in 2011. It's going to orbit for a few months, leave Vesta and arrive at Ceres, the dwarf planet, in February 2015.

Agle: What kind of science will we do when we arrive at Vesta?

Raymond: We are bringing it some instruments. We are bringing it some cameras to image the surface, a mapping spectrometer which will give us a much more precise spectral match between the Eucrites on Earth and the surface of Vesta. We are also using a gamma ray and neutron detector to make an even more precise match of some of the elements in the crust of Vesta with those samples that we have on Earth.

Agle: I've got to ask - do you love this stuff?

Raymond: It's really cool that you can hold a piece of deep space in your hand (while) standing on the earth, and then send a spacecraft out to go to where it came from and study that.

Agle: That's it from NASA's Jet Propulsion Laboratory. For the latest on Eucrites, Vesta and the entire dawn mission please visit us on the web at:

Agle: And remember, next time someone shows you a Eucrite…

Patel/Raymond: IT came from Vesta

› Play Podcast
› Back To Top