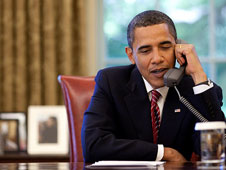 President Obama: Doing great. Am I speaking to Commander Altman?

Yes, sir, this is Scott Altman, the commander. I've got my whole crew on the flight deck with you.

President Obama: Well, it's great to talk with you, commander. Where are you exactly now? Do you have any idea?

Altman: We do. We're tracking that. We are about 200 miles up, approaching the Galapagos Islands, over the Pacific.

President Obama: Outstanding. Well, it is wonderful to speak to you today. I wanted to personally tell you how proud I am of all of you and everything that you've accomplished. Like a lot of Americans, I've been watching with amazement the gorgeous images you've been sending back and the incredible repair mission that you've been making in space. I think you're just providing a wonderful example of the kind of dedication and commitment to exploration that represents America and the space program generally. And these are traits that have always made this country strong and all of you personify them.

Altman: Well thank you very much, sir. I think you're exactly right that this mission's been an example of what our country can do as we work together. It's been a teamwork of all the folks on the ground in addition to the folks outside spacewalking making this all come together and work for us.

President Obama: Well, I know that you talked about what an incredible journey it's been for you and how ... it provides an example of how humanity can work together even in the most harsh environments to get things done. As I said, watching you guys out there in space on some of those spacewalks is amazing. And Dr. Grunsfeld, I was moved by your observation that the Hubble is more than just a satellite, but an iconic symbol of our quest for knowledge. I thought that that captures accurately the work that you guys are doing.

Mission Specialist John Grunsfeld: Well, thanks very much Mr. President. I know we all believe that in our hearts. What always strikes me as being so incredible is that it's almost impossible to go into any K-12 classroom these days and not see Hubble images on the wall inspiring kids to do great things and maybe some of them to become astronauts some day and push our frontiers even farther.

President Obama: Well, I know that you've excited my 10-year-old and my 7-year-old. And they've got some images like that that they prize whenever we talk about space. And so, by allowing Hubble to continue on its journey, you've really allowed all of us to continue on our journey for growth and exploration.

You know, here in Washington, there's a lot of talk about clarifying our focus, our vision for where the country needs to go. And I really think that what you guys represent is an example of what "vision" means. The space program's always described our willingness to stretch beyond current boundaries and to look at things in new ways. So, in that way, you inspire us all, and I'm hoping that you guys recognize how important your mission is to the world as well as to this country. And we're soon going to have a new NASA Administrator. I can't disclose it to you, because I've got to have hoopla on the announcement back here on Earth. But I can assure you that it's a high priority of mine to restore that sense of wonder that space can provide and to make sure that we've got a strong sense of mission, not just within NASA but for the country as a whole.

Atlantis: Well, we thank you very much, Mr. President for your interest in NASA and space exploration. We agree with you that this mission has, I hope, captured some of that spirit of exploration. Just so we're sure, the new administrator's not any of us on the flight deck right now, is it?

President Obama: (Laughter) You know, I'm not going to give you any hints.

President Obama: I do have to just, by the way, say, Captain, that you and Dr. Grunsfeld as Illinoisans, you know I've gotta give you a special shout out.

Atlantis: Well, thanks very much, my sister was just asking today to take a picture of Chicago as we went by. We were able to see it in the distance and take a picture so we can send that along as well.

President Obama: Outstanding. We'll I've gotta get a copy of that picture. Maybe I ... did you guys see my house? I'm trying to figure out if my lawn is getting mowed there. I haven't been back for a couple of months.

Atlantis: We'll have to point Hubble at it to see that, but we have something else that might be of interest. We have Edwin Hubble's University of Chicago basketball from 1909. It was a championship season for them.

President Obama: Well, that is quite a bit of memorabilia, because University of Chicago is not known for its basketball teams. It is known for its science, but basketball we've been a little wanting there. Anyway, I understand you guys are going to be getting back on Friday. I know your families can't wait to see you, and I just want to wish you all godspeed and tell you how grateful we are for the extraordinary work that you're doing.

Atlantis: Thank you, Mr. President, we're very honored both to speak with you and to be a part of this mission. It's been a great honor. We're very proud to be part of the space program and this Hubble mission.

Atlantis: Thank you, sir. We will. › Listen Now
› Back To Top