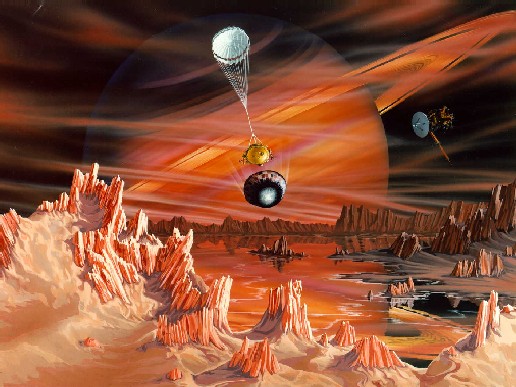 This artist's conception shows Titan's surface with Saturn appearing dimly in the background through Titan's thick atmosphere of mostly nitrogen and methane. The Cassini spacecraft flies overhead with its high-gain antenna pointed at the Huygens probe as it nears the surface. The Cassini-Huygens probe is set to arrive at Saturn in July 2004.

Artistic license has been used to exaggerate the size of the orbiter, the sharpness of the icy features, the tilt of Saturn's rings, and the visibility of the planet through Titan's atmosphere. Artwork by Craig Attebery