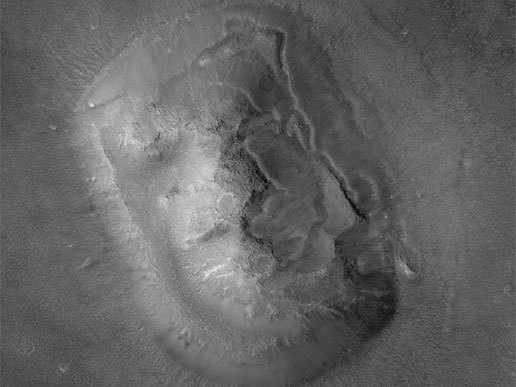 The Face on Mars

This high-resolution image from the Mars Orbiter Camera about the Mars Global Surveyor spacecraft shows the famous "Face on Mars" in detail, clearly showing it to be a natural geological formation. In the original image, taken by Viking 1, one of thousands of buttes, mesas, ridges, and knobs in the transition zone between the cratered uplands of western Arabia Terra and the low, northern plains of Mars looked somewhat like a human face. The feature was subsequently popularized as a potential "alien artifact" in books, tabloids, radio talk shows, television, and even a major motion picture.