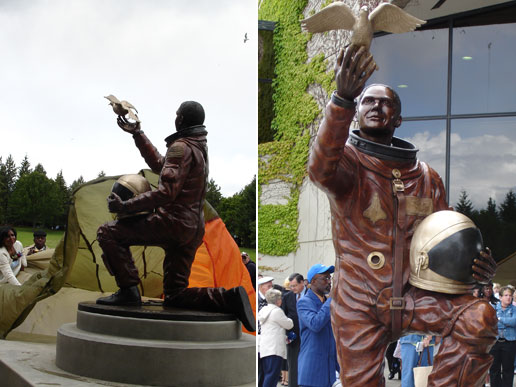 A statue honoring Columbia astronaut Michael P. Anderson was unveiled this weekend in Spokane, Washington, the STS-107 crew member's hometown. At left, Anderson's widow Sandy pulls a parachute aside, unveiling the memorial as a dove flies past at upper right. Anderson and his six crewmates lost their lives when Columbia broke apart on re-entry on February 1, 2003.

NASA's Deputy Administrator Fred Gregory joined other members of the NASA family at the event. Praising Anderson's "noble character," Gregory said that future generations visiting the statue will "turn their gaze to the skies, their hearts filled with gratitude for this brave explorer who helped blaze our trail to the stars."