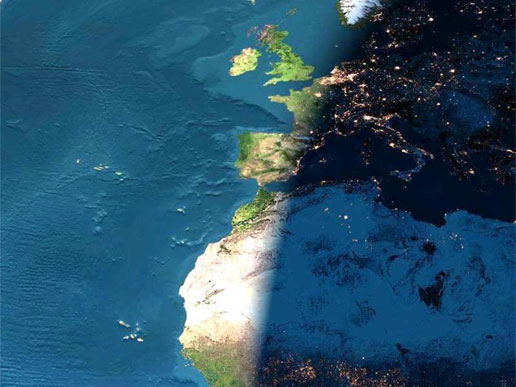 An Unreal View of Earth

This image presents a remarkable view of the North Atlantic Ocean, stretching from the equator and western Africa northward to Iceland and Greenland, with sunset occurring over Scandinavia, France, Spain, Algeria, Mali, and the Ivory Coast. As you look at this image, think for a moment about how it was made. Is it a photograph? If so, was it taken from space? Is it a painting, a map, or something else?

Clues from the image -- sea floor features, cloudless skies, bright vegetation, the visibility of sunlight and city lights, the huge field of view, and the curved "terminator" between day and night -- reveal that the image is a composite from many elements. The images, collected by a variety of instruments, at different times and places, with several wavelengths of light (and even sound) are combined in a computer to create an "impossible" view of the Earth. Scientists use images like this -- called visualizations -- to interpret complex data, and communicate their understanding to others.

Photo Credit: The Living Earth, via NASA's Earth Observatory
+ More on How the Image was Made