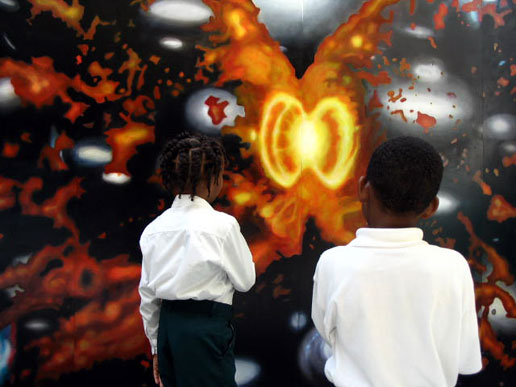 Inspiring the Next Generation

Students at the Merritt Elementary School in northeast Washington, D.C., admire "Hubba Bubba," a mural depicting images of space from NASA spacecraft like the Hubble Space Telescope. The NASA Art Program collaborated on the project with the Washington Project for the Arts and the Corcoran School of Art. The mural was created by Corcoran School students ranging in age from 16 to 68 under the direction Corcoran professor Bill Newman. It was on display at the Corcoran Museum and the Millennium Arts Center before being transferred to the school, which was made possible by the Washington Project for the Arts and the non-profit organization "Turning the Page."