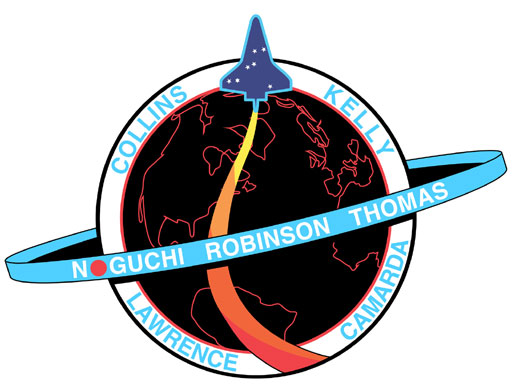 The STS-114 patch design signifies the return of the Space Shuttle to flight and honors the memory of the STS-107 Columbia crew.

The blue Shuttle rising above Earth's horizon includes the Columba constellation of seven stars, echoing the STS-107 patch and commemorating the seven members of that mission. The crew of STS-114 will carry the memory of their friends on Columbia and the legacy of their mission back into Earth orbit.

The dominant design element of the STS-114 patch is the planet Earth, which represents the unity and dedication of the many people whose efforts allow the Shuttle to safely return to flight. Commander Eileen Collins and Pilot James Kelly are named at the top of the insignia, with Mission Specialists Wendy Lawrence and Charles Camarda named below.

Against the background of the Earth at night, the blue orbit represents the International Space Station (ISS). Mission Specialists Soichi Noguchi, Stephen Robinson and Andrew Thomas, who will work on the Station during spacewalks, are named on the orbit. The red sun on the orbit signifies the contributions of the Japanese Space Agency to the mission and to the ISS program. The multi-colored Shuttle plume represents the broad spectrum of challenges for this mission, including Shuttle inspection and repair experiments, and International Space Station re-supply and repair.