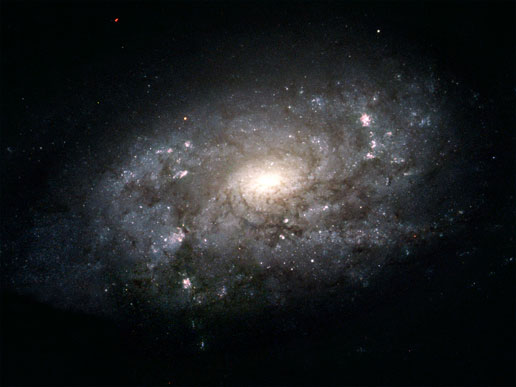 Our Sun and solar system are embedded in a broad pancake of stars deep within the disk of the Milky Way galaxy. Even from a distance, it is impossible to see our galaxy's large-scale features other than the disk.

The next best thing is to look farther out into the universe at galaxies that are similar in shape and structure to our home galaxy. Other spiral galaxies like NGC 3949, pictured in this Hubble image, fit the bill. Like our Milky Way, this galaxy has a blue disk of young stars peppered with bright pink star-birth regions. In contrast to the blue disk, the bright central bulge is made up of mostly older, redder stars.

NGC 3949 lies about 50 million light-years from Earth. It is a member of a loose cluster of some six or seven dozens of galaxies located in the direction of the Big Dipper, in the constellation Ursa Major (the Great Bear). It is one of the larger galaxies of this cluster.