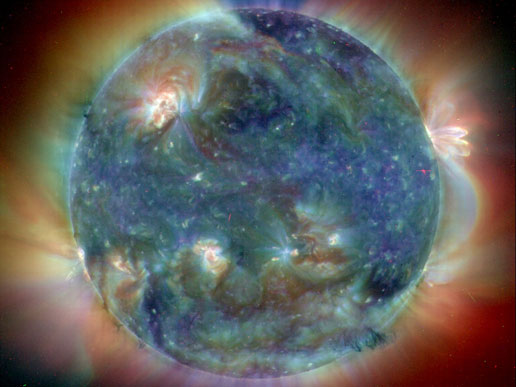 The Sun at Solstice

The Sun has reached its northernmost point in planet Earth's sky marking a season change and the first solstice of the year 2004. We celebrate the arrival of summer with this false-color composite of three images from the space-based Solar and Heliospheric Observatory (SOHO), a mission of international cooperation between NASA and the European Space Agency (ESA).

All three images are made in extreme ultraviolet light, but each individual image highlights a different temperature range in the upper solar atmosphere: Red at 2 million, green at 1.5 million, and blue at 1 million degrees Celsius (3.6 million, 2.7 million, and 1.8 million degrees Fahrenheit). The combined image shows bright active regions strewn across the solar disk, which would otherwise appear as dark groups of sunspots in visible light images.

SOHO's spectacular images are also featured in the cover article from this month's National Geographic magazine.

Image From Astronomy Picture of the Day, Credit: NASA/ESA