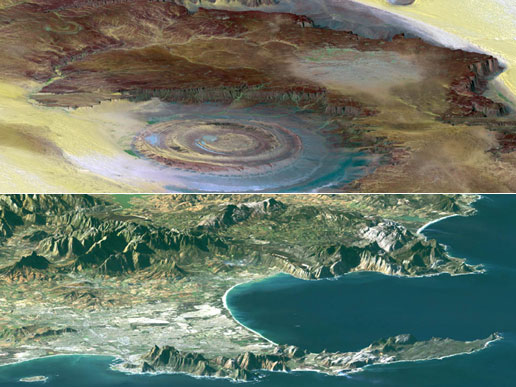 Thanks to the Shuttle Radar Topography Mission (SRTM), African topography can be studied and understood as never before. The two images above combine elevation data from SRTM on the Shuttle Endeavor in February 2000 with Landsat satellite images.

At top is the prominent circular feature, known as the Richat Structure, in the Sahara desert of Mauritania. It's often noted by astronauts because it forms a conspicuous 30-mile-wide bull's-eye on the otherwise rather featureless expanse of the desert. Initially mistaken for a possible impact crater, it is now known to be an eroded circular dome of layered sedimentary rocks.

Below, Cape Town and the Cape of Good Hope, South Africa, appear in the foreground of this perspective view. The city center is located at Table Bay (at the lower left), adjacent to Table Mountain, a 1,086-meter (3,563-foot) tall sandstone and granite natural landmark.