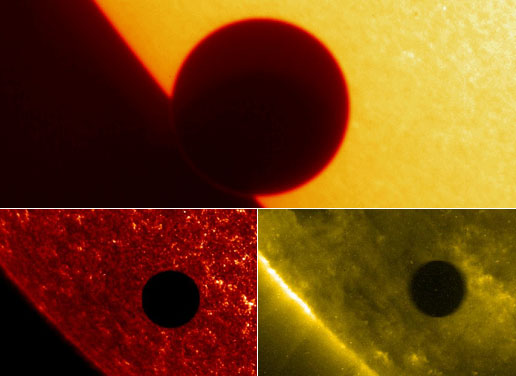 NASA joined the world today in viewing a rare celestial event, one not seen by any person now alive. The "Venus transit" -- the apparent crossing of our planetary neighbor in front of the Sun -- was captured from the unique perspective of NASA's Sun-observing TRACE spacecraft.

The top image shows Venus on the eastern limb of the Sun. The faint ring around the planet comes from the scattering of its atmosphere, which allows some sunlight to show around the edge of the otherwise dark planetary disk. The faint glow on the disk is an effect of the TRACE telescope. The bottom left image is in the ultraviolet, and the bottom right image is in the extreme ultraviolet.

The last "Venus transit" occurred more than a century ago, in 1882, and was used to compute the distance from the Earth to the Sun. Scientists with NASA's Kepler mission hope to discover Earth-like planets outside our solar system by searching for transits of other stars by planets that might be orbiting them.

If people miss the June 8 Venus transit, they will have another chance in 2012 (June 6). After that, there will not be another Venus transit until 2117 (December 11).