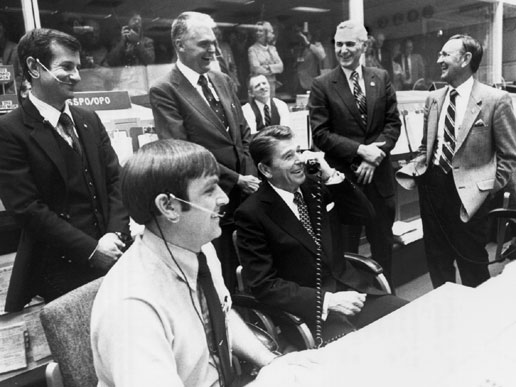 President Ronald Reagan's term saw triumph and tragedy for NASA -- from the first space shuttle mission in 1981, to his 1984 call to develop a permanently manned space station, to the 1986 Challenger disaster. His moving tribute to the seven Challenger crewmembers inspired the nation.

President Reagan also brought his sense of humor to NASA, as seen in this 1981 photo from Mission Control in Houston. Making an extremely long-distance call, the President jokingly asked Joe Engle and Richard Truly, the crew of the second Shuttle flight (STS-2), if they could stop by Washington en route to their California landing site so that he could come along with them.