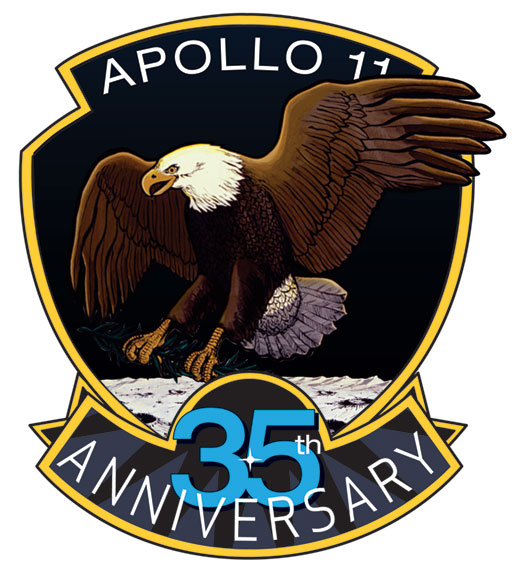 As NASA plans a return to the moon as part of the Vision for Space Exploration, we look back to the first lunar landing on July 20, 1969 -- commemorated in this new 35th anniversary symbol. The world watched on that summer night, as Apollo 11 astronauts Neil Armstrong and Buzz Aldrin set their lunar module Eagle down in the Sea of Tranquility, while their crewmate Michael Collins orbited above in the command module Columbia.

The new symbol is based on the original mission insignia, designed in NASA tradition by the crew themselves. The American eagle is about to land, clutching in its talons an olive branch representing that the crew "came in peace for all mankind." The Earth, the place from which the crew came and would return safely in order to fulfill President John F. Kennedy's challenge to the nation, rested on a field of black, representing the vast unknown of space.

In a departure from tradition, the crew didn't put their names on the patch, allowing the whole world to share in the remarkable accomplishment.