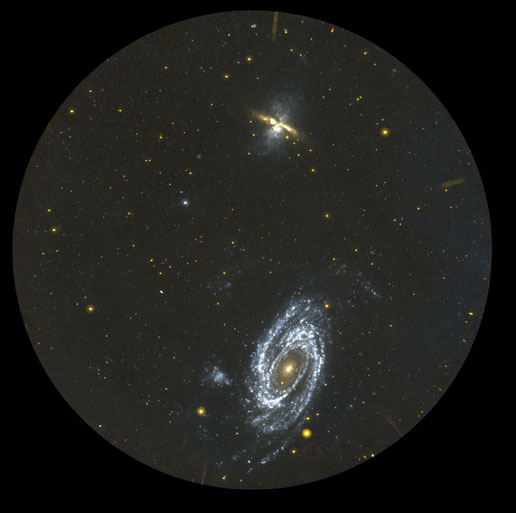 Celebrating one year since the launch of NASA's Galaxy Evolution Explorer (GALEX), this image of M81 and M82, a pair of galaxies 10 million light-years away, illustrates the satellite's unique window on the universe.

The great spiral of M81, similar in size and brightness to our Milky Way, is in the lower half of the image. The stars in its spiral arms have formed within the last 100 million years, as have most of the stars in the nearby dwarf galaxy. GALEX reveals that star formation is occurring quite distant from the nucleus of M81. The nucleus, or center, of M81 shines from the light of 10-billion year old stars near the end of their lives, which produce their energy by burning helium into carbon.

The upper half of the image shows the remarkable star-forming galaxy M82. Star formation is so violent in this galaxy (viewed from its side) that gas and dust is being expelled perpendicular to its disc. Once thought to be an exploding galaxy, the flows are caused by the supernova explosions from the young stars in this galaxy.