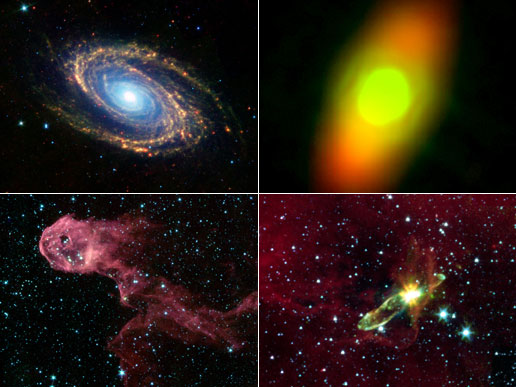 Top left: The dusty, star-studded arms of M81, a nearby spiral galaxy similar to our own, are illuminated in unprecedented detail. The image reveals Spitzer's ability to explore regions invisible in optical light.
+ High Res Image

Top right: A massive disc of dusty debris encircles a nearby star called Fomalhaut. Such discs are remnants of planetary construction; our own planet is believed to have formed out of a similar disc.
+ High Res Image

Bottom left: Resembling a flaming creature on the run, this image exposes the hidden interior of a dark and dusty cloud in the emission nebula IC 1396. Young stars previously obscured by dust can be seen here for the first time.
+ High Res Image

Launched in August 2003 as the Space Infrared Telescope Facility (SIRTF), Spitzer was renamed in honor of Dr. Lyman Spitzer, Jr, the first to propose placing telescopes in space.