SOHO Reveals the Sun's Secrets
We all know that without the Sun, life ends. The Sun is the most important life-sustaining element for the Earth. Powered by energy that is produced through fusion in its core, the Sun produces all of the heat and light that we receive on our planet. 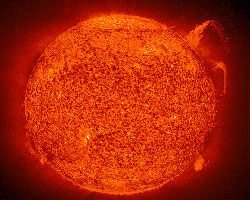 The SOlar and Heliospheric Observatory (SOHO) launched from Cape Canaveral, Florida, is a joint effort between NASA and the European Space Agency (ESA). SOHO is in orbit between the Earth and the Sun. It is about 150 million kilometers (93 million miles) from the Sun and only about 1.5 million kilometers (950 thousand miles) from Earth. Its mission is to understand the interactions between the Sun and the Earth's environment.

Originally designed to observe the Sun continuously for at least two years, SOHO has been so successful that scientists are expecting to receive vital solar data until 2007.

Did you know that the Sun is not a solid body like the Earth? It's more like the planet Jupiter, rich in many types of gasses. Because of this, the equator rotates once every 25.4 days while it takes 36 days for the outer layers near the poles to complete a rotation.

The SOHO spacecraft studies solar wind, flares and sunspots. Why is this important? Because these events have dramatic effects on the trajectories and operation of spacecraft and astronauts living in space. On Earth, effects can range from radio interference to the beautiful aurora borealis.

At left is an artistic depiction of the Sun's magnetic field and plasma releases as it directly affects the Earth and the rest of the Solar System.

The Sun's output and sunspot activity is never constant. In the later half of the 1700's very low sunspot activity coincided with an abnormally cold period in Europe often known as the Little Ice Age.

A recent solar explosion associated with a sunspot, designated AR 484, although not directed at Earth, could affect its magnetic field and trigger a geomagnetic storm. SOHO, and its NASA companion satellites, Ulysses, the Advanced Composition Explorer (ACE) and Wind missions keep a steady eye on the Sun's antics as silent observers.

There will come a day when the Sun will run out of hydrogen fuel, which is the chief component of its composition. But that's not expected for another five billion years, so breathe easy and get out the sunscreen.