Out With a Bang! 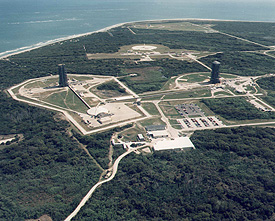 Determined not to go quietly into the misty Florida night, the last Atlas III-Centaur booster thundered into the cloudy sky on Feb. 3 to punctuate the final launch for Cape Canaveral Air Force Station's venerable Launch Complex 36. The combined histories of the Atlas-Centaur family and Complex 36 reflect intertwined programs that teamed to produce one of NASA's most successful exploration eras.

Image to right: Launch Complex 36 sits along the Atlantic coast on Cape Canaveral Air Force Station, Florida. Visible in this image are the Complex's two launch pads as well as its circular, concrete "blockhouse."
Credit: NASA

Not far from the shores of the Atlantic Ocean, Launch Complex 36 rises out of the sandy scrub forests that string along Florida's eastern coast. The launch area's towering sibling launch pads - 36A and 36B - flank a concrete-reinforced, domed "blockhouse." Like a circular cement vault designed to keep its contents safe from harm, the blockhouse protected engineers housed inside as they issued commands to ignite steaming rockets charged with ultra-cold liquid fuel.

Launch Complex 36 was constructed by the Air Force in 1961 and operated by NASA. The Agency needed the site to launch the new Atlas-Centaur booster developed by NASA and built by General Dynamics Corp. The rocket combined the lower stage of an Atlas missile with a powerful hydrogen-fueled upper stage called "Centaur." The first Atlas-Centaur took off from Complex 36 on May 8, 1962.

Following the booster's initial launch, the rocket went through a series of development flights. The vehicle and Complex 36's first marquee launch occurred on May 30, 1966, when Atlas-Centaur 10 roared from the pad, sending NASA's Surveyor 1 craft into space. A little more than a week later, Surveyor softly touched down on the Moon, becoming the first American spacecraft ever to make a controlled landing onto the lunar surface. Six more Surveyor spacecraft later flew from Complex 36 to explore other regions of the Moon and serve as scouts for the historic Apollo program. 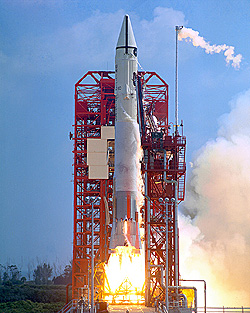 In the decades to follow, Complex 36 continued to host the Atlas-Centaur program. In addition to the original Atlas-Centaur rocket, the facility eventually served the upgraded Atlas II and Atlas III vehicles later built by Lockheed-Martin Corp. In its lifetime, Launch Complex 36 saw a combined total of 145 rockets lift off from its two pads.

Image to left: NASA's Surveyor 1 spacecraft was carried into space aboard Atlas-Centaur 10. Surveyor 1 was America's first spacecraft to softly land on the Moon and a forerunner to the Apollo program. Credit: NASA

Throughout its nearly 43 years in operation, the facility launched a mixture of private and governmental satellites and NASA spacecraft. During the 1960s and 1970s, vanguard NASA planetary explorers such as the Mariner and Pioneer probes left for distant destinations like Mars and Jupiter. Flights of science missions extended into the 1990s and included the 1995 launch of the SOHO spacecraft to study the Sun and identify comets.

With the final flight of the Atlas III-Centaur complete, crews are now in the process of removing ground support equipment and making the area safe to be left unattended. For now, the Complex will be left in stand-by condition with its major structures in place. Given Launch Complex 36's ideal location, it's entirely possible another family of rockets could find success there and together write a history of their own.