Phoenix: The Search for Water
Named for the mythological bird that rose out of the fire to be reborn, Phoenix the new Lander for the next Mars mission to launch in 2007, was aptly named. 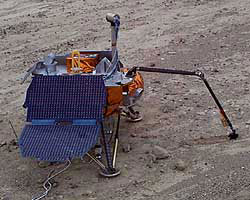 Originally part of the 2001 Mars Surveyor Program, the spacecraft that was built and tested to fly with the Mars Polar Lander mission was stored after the loss of the Surveyor. Renamed Phoenix, the craft is in preparation to finally take flight.

Now a component of NASA's Mars Exploration Program, Phoenix is a relatively low-cost project, and is the first Mars "Scout" mission to study the planet's ice cap. Landing near the northern polar region, a unique camera system will photograph the landing site just before it touches down in late 2008.

The Phoenix Lander's robotic arm will dig down over 3 feet into the red planet's subsurface to collect ice and soil samples while a camera mounted on the arm monitors the action. It will land in an area that has the possibility of 80 percent water-ice by volume within one foot of the surface. 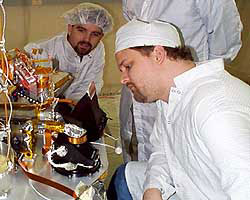 These new studies hope to provide evidence of life by measuring the previously un-measurable. Instrumentation on the Phoenix will have the ability to examine materials 1000 times less than the width of a human hair.

At right scientists observe Phoenix in the laboratory testing stage

The immediate goals of the Phoenix mission are to study the geologic history of water, and to search for evidence that Mars may have sustained life. Continued research will be done to determine whether dormant organisms could come back to life. As on Earth, the past history of water is found in the subsurface as liquid water changes the chemistry of the ground substance. 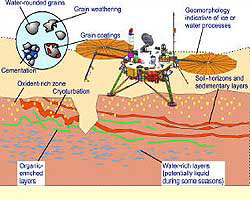 Phoenix is a partnership managed by NASA's Jet Propulsion Laboratory in Pasadena, Calif. Lockheed Martin Space Systems, Denver, will build and test the spacecraft while Canadian partners provide the meteorological instrumentation. The University of Arizona at Tucson, under the direction of Dr. Peter H. Smith will oversee the scientific research.

The questions waiting to be answered according to Dr. Smith are, "is there life on Mars, has there ever been life on Mars and if there is or was, how does it compare to life on Earth?"

It remains to be seen what the data will actually show us but the scientists are assured that they will be provided with many exciting discoveries that they cannot even contemplate now.