Join Us For Live Coverage of the MER-B Launch 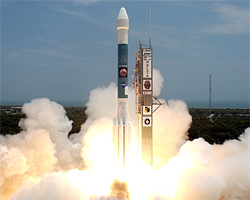 The KSC Web will provide live countdown coverage of the MER-B launch from the Virtual Launch Control Center located at http://www.ksc.nasa.gov/elvnew/merb/vlcc.htm. Coverage will begin at 9:30 p.m. EDT on Saturday, June 28, and will feature video clips and real-time updates as the countdown progresses.

At left: The Delta II rocket carrying the Mars Exploration Rover Spirit lifts off flawlessly from Launch Pad 17-A on June 10, 2003.

Were you wondering about the difference between the two identical Mars Exploration Rovers? Curious about a Launch Director's job as the countdown heats up, or how the MER-B rover, Opportunity, will handle the tasks of a robotic geologist? Then you'll want to check our NASA Direct! archives site next week for replays of these webcasts.

The "MER Mission Overview" program was webcast on June 26 at 3 p.m. EDT. Host Tiffany Nail was joined by MER spacecraft mission director Peter Theisinger for an overview of how the scientific data gathered by Opportunity will be processed on Earth.

The second program, "Preparing for Launch," was webcast on June 27 at 2:15 p.m. EDT. This program, also hosted by Nail, featured a weather update with Launch Weather Officer Joel Tumbiolo; a launch readiness overview with NASA Launch Manager Omar Baez; and an in-depth look at the tasks that await Opportunity, presented by Principal Investigator Steve Squyres.

The MER-B webcasts included answers to questions submitted to the following Question Board categories:

The Launch Director's Duties
Opportunity on Mars: The Job of a Robo-Geologist
MER-A and MER-B: How Are They Different?

The NASA Direct! home page is available at http://www.ksc.nasa.gov/NASADirect/index.htm