MER Rovers Are Biologically Clean
What do NASA's soon-to-be-launched Mars Exploration Rover (MER-1 and MER-2) spacecraft have in common with the Viking and Voyager spacecraft launched decades ago? Besides being interplanetary explorers, they will be among the biologically cleanest spacecraft ever launched from Cape Canaveral Air Force Station. 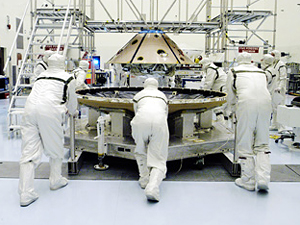 Making sure the spacecraft are as biologically clean and contamination-free as possible before they leave Earth is one of the requirements of Article IX of the Outer Space Treaty of 1967, requiring all space-exploring countries to "avoid the harmful contamination ... resulting from the introduction of extraterrestrial matter." In response, NASA developed its own policy and procedure outlining the cleanliness requirements for NASA spacecraft that protects other solar system bodies from Earth life and protects Earth from extraterrestrial life that may be brought back by returning space missions.

According to Laura Newlin, Jet Propulsion Laboratory (JPL), Pasadena, Calif., engineer and Planetary Protection (PP) Lead for the MER missions, JPL's Biotechnology and Planetary Protection Group seeks to advance spacecraft cleanliness, sterilization and validation technologies for NASA's solar system exploration missions. And Newlin said, "Keeping the spacecraft as clean as possible before, during and after launch is very important for any science instruments searching for organic compounds on the surface of other planets."

How clean does NASA's PP requirements say the spacecraft must be? "Up to 300,000 spores are allowed on the exposed surfaces of the landed spacecraft. That many spores would fit on the head of a large pin," said Newlin. A companion requirement to this is the average spore density on the surfaces must be less than 300 spores per square meter (28 spores per square foot). There are approximately 4500 square meters (approximately 48,000 square feet) of surface on each MER spacecraft, including the cruise stage.

Both spacecraft have undergone extensive alcohol-wipe cleaning and bio-testing processes. They were disassembled and cleaned to remove any contamination that may have occurred during transport to KSC. During reassembly, JPL PP team members swabbed surfaces of both spacecraft to check for spore growth. In order to limit the sample to spore-forming bacteria, a heat shock (80 degrees Celsius for 15 minutes) was performed. This process forces bacteria into their spore form and kills vegetative growth. 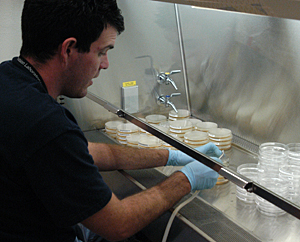 Technicians from JPL have been preparing the robotic explorers at Kennedy Space Center for their journey to the red planet.

Culturing of the samples was performed in several Hangar L labs using equipment from JPL or provided by KSC.

"Currently our total spore count on the surface of both MER vehicles is comfortably under 200,000, so we're below the allowable level," said Newlin.

According to Newlin, the PP team worked with the spacecraft design engineers to determine PP strategies, what hardware should be cleaned and what hardware would require other PP approaches, all of which were integrated into the design, fabrication, and assembly of the spacecraft.