Galileo's Destination is its Demise
Galileo's last mission is a spectacular impact on the planet Jupiter, September 21, 2003.

Galileo was launched on October 18, 1989 from NASA's Kennedy Space Center, Florida. It was carried into Earth's orbit in the cargo bay of the Space Shuttle Atlantis. Reaching Jupiter on December 7, 1995 the spacecraft immediately began transmitting exceptional data that was beyond anyone's expectations.

Galileo Galilei would have been proud of his namesake. He made the first accurate observations of the heavens using a telescope in 1610 but he could have never envisioned the ingenuity that went into developing and building the spacecraft and its onboard payload of instrumentation.

Galileo invented many mechanical devices. His most famous invention was the telescope in 1609 that could magnify objects twenty times. He was able to look at the moon, discover the four satellites of Jupiter, observe a supernova, verify the phases of Venus, and see sunspots. His discoveries proved the Copernican system which states that the earth and other planets revolve around the sun.

Galileo reached Jupiter in the most unusual flight path. Because the spacecraft didn't have enough fuel to propel itself directly to Jupiter, energy was "borrowed" from Venus and Earth. Mission planners designed a flight path with the nickname "VEEGA", for Venus-Earth-Earth Gravity Assist. Galileo flew once by Venus, and twice by Earth, gathering enough energy to get to Jupiter.

Galileo, first in his day to announce the Earth orbited around the sun and not the other way around, was jailed for heresy. His book The Starry Messenger was banned and he died while under house arrest in 1642 at the age of 68. Fortunately his findings transcended the critics and the discoveries Galileo made are the foundation of today's solar system exploration expeditions. 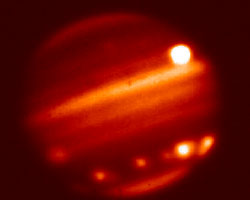 Although ground observation had to wait, Galileo was in the perfect position to "see" the impact site as the comet Shoemaker-Levy 9 crashed into Jupiter.

This image of Jupiter was taken by the NASA Infrared Telescope Facility infrared camera ( NSFCAM) at Mauna Kea, Hawaii. The Great Red Spot is visible in the south east of the planet along with several other impact sites.

The Galileo spacecraft had some difficulties in its journey as did Galilei in his. On the first Earth flyby the umbrella-shaped antenna didn't open as scheduled and engineers worked diligently reprograming so valuable data wouldn't be lost. Success was achieved and Galileo began transmitting some incredible images. NASA's Deep Space Network was used to collect the data from Galileo and captured images of heavenly bodies never seen before. 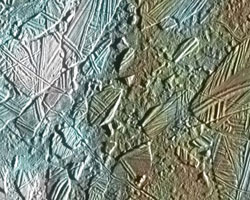 Galileo was scheduled to conclude its mission on December 7, 1997 but because it was still in good condition NASA approved a two year study called GEM, the Galileo Europa Mission, and The Galileo Millennium Mission which lasted until 2001. Galileo is specifically programmed for its September impact with Jupiter to maneuver away from and protect Europa's surface for later missions.

Although Galileo Galilei was never to enjoy the fruits of his research, in 1992 three years after the Galileo spacecraft had been launched on its way to Jupiter, Galileo was cleared of any wrongdoing by the Vatican. Although 350 or so years is a long time to wait, we can now prove that his findings were right on target.