Is the Moon Out Tonight?
Last month, the Hubble Space Telescope peered into the depths of space and sent back images of a new, mysterious planet-like body at the outer reaches of our Solar System. But it's what the telescope didn't see that is perplexing scientists. 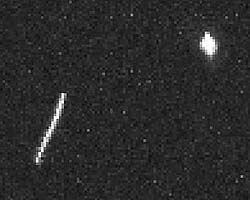 Image Left: Hubble took a total of 35 images of Sedna. The planetoid appeared to move slightly between exposures. Sedna is moving through space, but too slowly to be seen in this picture. The fact that the object shows this parallax shift between exposures demonstrates that Sedna is a member of the solar system, and closer to the Earth than the background star (at right) in the same field of view. Credit: NASA/ESA/M. Brown (Caltech)

In the weeks following the discovery, researchers expected Hubble to reveal images of a moon revolving around the newly found planetoid named Sedna. This is because Sedna appears to have a very slow rotation, which usually would mean the planetoid is slowed by the gravitational pull of a body revolving around it.

So far, any indication of a companion moon of any substantial size hasn't been seen.

"I'm completely baffled at the absence of a moon," said Mike Brown of the California Institute of Technology. "This is outside the realm of expectation and makes Sedna even more interesting. But I simply don't know what it means."

Sedna's rotation has been calculated to take 40 days compared to Pluto's six-day period. If in time this proves to be accurate, Sedna would be the slowest rotating object in the Solar System after Mercury and Venus.

NASA's Hubble Telescope, using its new Advanced Camera for Surveys, only showed Sedna in its observations. But there is still a small possibility that the planetoid has a moon that could be behind Sedna or in front of it. 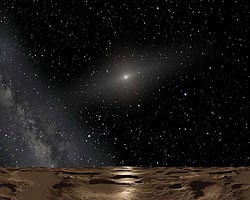 In both cases, Hubble would not be able to see it. According to Brown, doing so would be like trying to see a soccer ball that is 900 miles away.

Image Right: This is an artist's impression of noontime on Sedna. The Sun is a brilliant pinpoint of light 100 times brighter than the full Moon. The dim spindle-shaped glow of dust around the Sun defines the ecliptic plane of the solar system. To the left the Milky Way stretches into the sky. Saturn is also visible as a dim star. Earth would be only half a degree from the Sun and only be visible with powerful binoculars. Click on image for larger view. Credit: NASA/ESA/ Adolf Schaller

NASA's ground and space telescopes - including the new James Webb Space Telescope (JWST), planned for launch in 2011 - will be focused on Sedna over the next 72 years, during its closest distance to Earth.

As Sedna continues to travel in its 10,500-year orbit around the Sun, only the highest-resolution, infrared-light-seeking instruments such as the JWST will have the ability to study the most frigid bodies in our Solar System.