Saturn Stumps Scientists
The two biggest planets in our Solar System, Jupiter and Saturn, seem to have a lot in common. They are both "gas giants," composed mostly of hydrogen and helium. Each has a long list of moons and a series of rings. Their solar orbits are side by side. 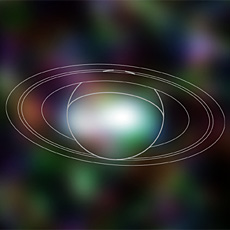 Because these two giants are so similar, scientists expected the pattern of X-rays emitted by Saturn to match that of Jupiter. So, when images captured by NASA's Chandra X-ray Observatory in space showed that Saturn's X-ray emissions are concentrated around its equator -- unlike Jupiter, where the bulk of X-rays are emitted from the polar regions -- scientists were stumped.

Image to left: Chandra's image of the gaseous giant Saturn revealed a bright concentration of X-radiation around the planet's equator. Credit: NASA/University of Hamburg

When Chandra observed Saturn for about 20 hours in April 2003, it found that the spectrum was more like that of the Sun than that of Jupiter.

"This indicates that Saturn's X-ray emission is due to the scattering of solar X-rays by Saturn's atmosphere," said Jan-Uwe Ness of the University of Hamburg in Germany. Ness is lead author of a paper discussing this discovery in an upcoming issue of Astronomy & Astrophysics. "It's a puzzle, since the intensity of Saturn's X-rays requires that Saturn reflects X-rays 50 times more efficiently than the moon."

The amount of X-ray power coming from both planets' equators is roughly the same: about 90 megawatts. But what scientists find especially significant is that Saturn appears to lack the impressive polar X-radiation found on Jupiter. 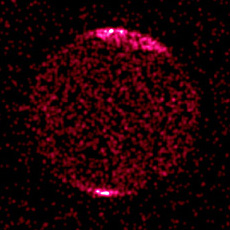 But that wasn't Saturn's only surprise. Further puzzling astronomers, there was an absence of X-radiation from Saturn's South Pole. (The planet's rings blocked the view of its North Pole.) Both planets' magnetic fields are strongest near the poles, where bright auroras have been observed. Since Jupiter's polar X-ray emissions are so bright, Ness's team expected to see the same thing when observing Saturn. Right now, they're not sure whether Saturn's auroras simply don't produce X-rays, or if they may concentrate the X-rays at the North Pole.

When compared to observations of Jupiter, these findings on Saturn may have raised more questions than were answered. Even though these gas giants seem alike, there are mysterious differences between them.