The Final Frontier
When the National Research Council recommended Solar System exploration goals for 2000-2010, the number one priority was sending a probe to explore Pluto and an area just beyond it known as the Kuiper Belt. 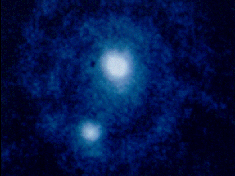 NASA plans to make that goal a reality.

In 2006, New Horizons is scheduled to blast off from Cape Canaveral and begin the trek from Earth to Pluto. It's a half-ton spacecraft loaded with hardware that will help us understand the distant reaches of the Solar System.

Image to right: Pluto and Charon appear as small, enigmatic worlds barely visible through telescopes on Earth. NASA's New Horizons will seek to answer many of the questions surrounding this "double planet" system. Credit: NASA

Distant might be an understatement: the trip to Pluto would take almost 10 years, but the monumental journey is worth it. Pluto and the Kuiper Belt have some big secrets to share with us.

Long ago, as the Solar System cooled and the planets formed, Pluto settled into a 248-year orbit around the Sun. As we strain to see it with our most powerful telescopes, it reflects sunlight from its icy surface and intrigues us with its many enigmatic qualities.

Pluto's atmosphere is 100,000 times thinner than Earth's, but astronomers expect weather, haze, and all the kinds of atmospheric activity you might expect to find on Earth. Because of the planet's small size and weak gravity, the upper atmosphere is expected to resemble that of a comet's.

Orbiting around Pluto and barely visible unless you know what you're looking for is its planetoid partner Charon, a much smaller world, covered in frozen water. Some astronomers call Pluto and Charon a "double planet" system; others think of Charon as Pluto's moon. One thing's for sure: we've never been there to find out for sure, and New Horizons aims to change that.

The most important discoveries we'll get from exploring Pluto and Charon most likely will be those we're not expecting. Throughout history, the most amazing things man has discovered were never anticipated. As part of the Vision for Space Exploration, NASA will explore these unknown worlds, expanding the human presence deep into the Solar System.

But that's not the most exciting part of the mission. Once New Horizons has studied Pluto and Charon, it would turn its sights onto the Kuiper Belt, a region deeper into space and far more mysterious. 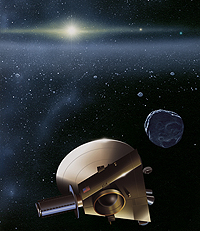 The Kuiper Belt was just a theory until 1992, when the discovery of an icy body orbiting beyond Pluto confirmed what many astronomers had always believed: There's an incredible amount of small, icy worlds drifting around the Sun about a billion miles beyond Neptune's orbit. These are the frozen remnants of our Solar System's creation.

NASA's New Horizons is designed to study these objects to help us better understand what happened in the beginning of our Solar System. It will give us a direct window into the events that led to life on Earth. This small spacecraft, drifting in the deep void of space and studying giant chunks of ice as cold as 400 degrees below zero Fahrenheit, will help us find out where we came from.