The Long and Winding Road
It's pretty easy to fly by a planet. 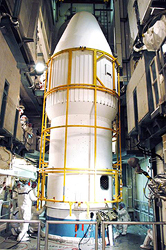 Point your spacecraft in the right direction to pass by the planet as it orbits the Sun, and get whatever information you can during the high-speed rendezvous. That was NASA's strategy during the early days of Solar System exploration, and it provided us with an incredible amount of insight into our universe.

Image to right: Workers at Pad 17-B prepare the Delta II payload fairing for installation around MESSENGER. On August 2, the spacecraft will begin a 7-year trek to Mercury. Credit: NASA.

The difficulty level gets turned up a notch when talking about "orbital insertion." You're not just flying by the planet; you're getting there and then slowing down to the point where the world that you want to explore pulls your spacecraft into orbit around it. Too slow and your probe will drop into the planet's atmosphere and burn up. Too fast and you'll fly off into space, stuck helpless in a solar orbit for billions of years.

NASA's MESSENGER will head into space with all the energy and speed it had when it left the Earth, and then have to slow down to meet up with Mercury.

This means MESSENGER has to burn off a lot of energy during its journey. One way is to carry a large amount of fuel and perform braking maneuvers during the trip. But fuel already accounts for more than half of MESSENGER's total launch weight; adding more would weigh down the spacecraft to the point where it wouldn't be practical to launch at all. 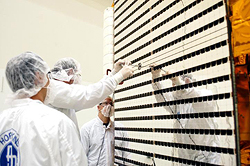 The other technique, which MESSENGER is going to undertake on its journey, is called "gravity assist." Most people think of speeding up a spacecraft when they hear about this concept, but it can actually work to slow one down as well.

Image to left: Solar panels are installed on the MESSENGER spacecraft at the Astrotech facility in Titusville, Florida. MESSENGER is also equipped with a solar shield, to protect it from the intense heat the Sun during its mission. Credit: NASA.

NASA's MESSENGER will fly by Earth, Venus and Mercury several times to burn off energy before making its final approach to the inner planet on March 18, 2011.