Two Little Rovers, One Big Audience
Where were you when Spirit, the first of NASA's twin Mars Exploration Rovers, hurtled through the martian atmosphere for a flawless landing on the red planet? 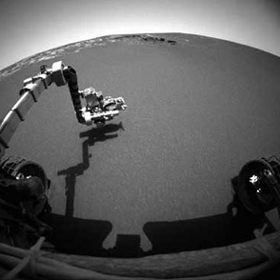 If you were watching the Jan. 4 landing live on NASA's Web Portal, you certainly weren't alone. More than 48,000 people watched the mission coverage that night, and even more tuned in for the landing of Opportunity three weeks later.

This image taken by the front hazard-identification camera onboard the Mars Exploration Rover Opportunity shows the rover's arm in its extended position.

NASA's Mars Exploration Rovers are global hits -- 6.53 billion hits, to be exact. Since that first night, NASA's Web Portal has delivered images and Web cast NASA Television mission coverage to an eager audience. Public reaction to the mission was immediate; the portal took 225 million hits in the first 24 hours after Spirit landed.

"We're thrilled at the interest people are taking in Spirit and Opportunity," said Jim Garvin, chief scientist for NASA's Mars Exploration Program. "One of the mission's goals was to use the Internet to bring the public 'inside' the mission, whether they come on their own or through a school or museum. We feel like we've accomplished that so far, and there's still much more to come."

The 6.53 billion hits the portal has served up are equivalent to sending at least one piece of information (a picture, video clip or text from a Web page, for example) to every man woman and child on Earth. The U.S. Census estimates the global population at more than 6.3 billion people.

Because most Web pages are made up of several text and graphic elements -- each of which counts as a hit -- the hit count translates into about 914 million Web pages being downloaded.

"To the best of our knowledge, this is the biggest government event in the history of the Internet," remarked Glenn Mahone, NASA assistant administrator for the Office of Public Affairs. "We've passed the peak traffic for the IRS Web site during tax season and for NOAA's site during Hurricane Isabel last fall. Since the rovers' missions will last 90 days each, it's possible this will wind up being the biggest single event in Internet history."

Web site visitors have come from all over the world, with international visitors making up approximately one-fifth of all traffic. About one-quarter of the visitors said through a NASA Web site survey that they were elementary or secondary school students or teachers.

"What's particularly gratifying for us is that the results from our customer satisfaction survey during the peak traffic were the highest we've ever received," added Brian Dunbar, NASA's Internet Services Manager. "So not only were we serving more people than ever, they told us we were doing the best job we've ever done."

For images and information about the Mars Exploration Rover project on the Internet, visit:
http://marsrovers.jpl.nasa.gov
http://athena.cornell.edu
NASA Headquarters and John F. Kennedy Space Center
› Back To Top