Amazing GRACE
Gravity has an effect on everyone and everything on Earth. Although we can't see it, smell it, taste it or touch it, we know it's there. Although scientists already know quite a bit about this invisible force, many aspects of this fundamental force of nature remain mysterious. 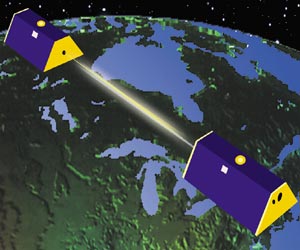 In 2002 NASA teamed-up with the German Space Agency to launch the dual satellites that make up GRACE, short for the Gravity Recovery And Climate Experiment. These uniquely-designed twin satellites were developed to provide detailed measurements of Earth's gravity field that help scientists better understand the effects gravity has on Earth's global climate change.

"Scientists have studied Earth's gravity for more than 30 years, using both satellite and ground measurements that were of uneven quality," said Dr. Michael Watkins, GRACE project scientist at NASA's Jet Propulsion Laboratory in California. Errors in some locations were off by as much as 3 feet. Now, these measurements can be taken to within about 1 centimeter (0.4 inches) of accuracy. "That's progress," Watkins said.

Why do the sensors need to be that sensitive? Because the variations in gravity across Earth's surface are very small and the weight of an object is not the same at every point on Earth. We live on a lumpy, bumpy planet scattered with mountains, valleys and caverns. These features have slightly different masses so as a result, the gravitational force changes ever so slightly across the surface of the Earth. GRACE maps out these sensitive gravitational changes.

GRACE can detect changes as small as one-tenth of the width of a human hair in the separation of the two spacecraft. This distance measurement is combined with Global Positioning data that gives the precise location of the measurement over Earth's surface. Every 30 days, scientists produce gravity maps that are 1,000 times more accurate then maps previously produced that had errors too large to be useful. 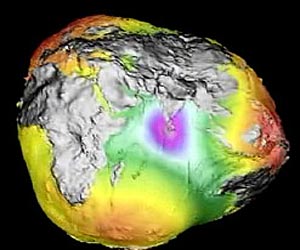 Image to left shows an uneven distribution of mass inside the Earth. The Earth's gravity field is not uniform - that is, it has "lumps." GRACE maps out the precise location and size of these lumps, enabling greater understanding of the structure of the Earth. Credit: NASA

GRACE monitors the mass and location of water as it moves around on the surface of the Earth, cycling between the land, oceans, and polar ice caps.

Scientists also know that gravity is responsible for keeping the air and clouds from drifting away into space, creating the ups and downs of the ocean tides and a force that pulls two objects together.

So how can knowing more about gravity help us? Better understanding and ever-improving capability allows researchers to know how gravity affects our oceans, climate changes and land masses, which can then lead to better predictions about changes in water supply, weather forecasts and natural hazards.

Gravity may be known as the weakest force in all of nature, but it still keeps our feet on the ground and manages to hold our galaxies and solar system together.