Launching the NASA Vision
If you're going back to the Moon, you ought to visit the place that made it happen the first time.

That was the idea when Admiral Craig Steidle, NASA's associate administrator for Exploration Systems, visited the Kennedy Space Center May 13. His reason for the trip was simple: find out what KSC had to offer, and match that to the requirements of NASA's new vision. 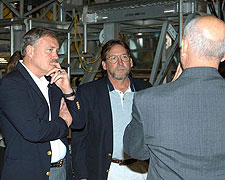 "This is certainly the operations center of the future," noted Steidle. "It also is the Center around which we will develop those technologies for life-cycle support of our systems and our infrastructures in the future."

Steidle, who retired from the Navy in 2000, was selected by NASA in January of this year to run the Office of Exploration Systems. That makes him responsible for figuring out the best way to get America back to the Moon and eventually beyond.

"This is the greatest job I've ever had, or could possibly have," said Steidle, adding that he knew that NASA's workforce shared his excitement about their own positions. "They are really happy to be a part of everything that's going on."

"This is an opportunity for KSC to share with Admiral Steidle what we've done in the past, to support programs at the Kennedy Space Center, and (show) the capabilities we think we have to contribute to this beautiful vision of exploration that our nation now has," said Kennedy.