But if you want a spacecraft to stick around your celestial neighborhood, there are only five places to consider. 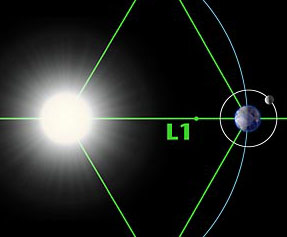 Lagrange points are locations in space where objects sent there tend to stay put. A French-Italian mathematician named Joseph-Louis Lagrange, born in 1736, mathematically hypothesized their existence during his study of planetary physics.

Lagrange believed that in a two-body system, such as Earth and the sun, there would be points nearby where an third object could be positioned and remain in place relative to the other two objects.

Lagrange point 1, or L1, is located about 4 times farther from Earth than the moon. Click on the image for a diagram of all five Earth-Sun Lagrange points.

Typically, a spacecraft sent from the Earth into the vacuum of space will continue moving in the direction we send it, unless it's affected by the gravity of a celestial object, like a star or a planet. Even if we stopped a spacecraft in the middle of space, the gravity of objects around it would eventually pull it in some direction.

Enter Joseph-Louis Lagrange. He theorized that at certain points the gravity of two bodies, combined with the third body's centripetal force, would keep the third body in a constant location relative to the other bodies. 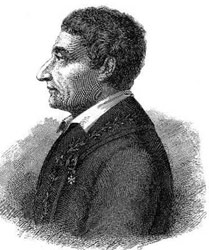 Lagrange was right. And now, NASA is using those points in space as parking spots for spacecraft which are discovering the secrets of the universe.

At Lagrange point 1, about 932,000 miles from Earth and toward the Sun, is SOHO, the Solar and Heliospheric Observatory. Launched in 1995, SOHO was designed by NASA and the European Space Agency to study the Sun's effects on the Earth. Because the spacecraft is not orbiting the Earth, it enjoys an uninterrupted view of the Sun at all times and collects information about the solar wind an hour before it reaches the Earth.

Joseph-Louis Lagrange, 1736-1813, was born in the town of Turin, located in what is now northern Italy. At age 19, Lagrange began his work as professor of mathematics at the Royal Artillery School in Turin.


Lagrange point 2 is located the same distance from the Earth as SOHO, but in the opposite direction. Here, you'll find WMAP, the Wilkinson Microwave Anisotropy Probe. The probe, launched two years ago, has taken the most detailed picture of our universe in history. By collecting microwave radiation from over 13 billion light years away, scientists have been able to precisely determine the age of the universe and its components, and produce substantial evidence supporting the Big Bang theory. 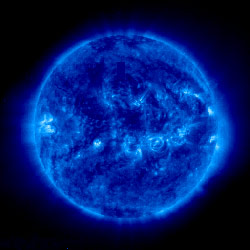 This image, taken by the Solar and Heliospheric Observatory at Lagrange point 1, shows the sun as seen through an extreme ultraviolet camera onboard.