Moon Dance
"Now eclipses are elusive and provoking things...Consequently, it will not do to sit down quietly at home and wait for one to come, but a person must be up and doing and on the chase!"

Rebecca R. Joslin made that declaration in 1929, in her book "Chasing Eclipses," and she had a good point: Most spots on the Earth will only experience a total solar eclipse once every 400 years or so. 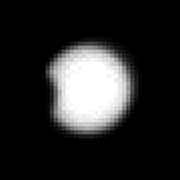 Scientists working with the Mars Exploration Rovers took Joslin's advice to heart. They used Opportunity to photograph solar eclipses as the martian moons, Deimos and Phobos, passed in front of the Sun as seen from Meridiani Planum.

Image to right: The martian moon Phobos passes in front of the Sun in the first picture of an eclipse taken from the surface of another world. Credit: NASA

"Scientifically, we're interested in timing these events to possibly allow refinement of the orbits and orbital evolution of these natural satellites," said Dr. Jim Bell, lead scientist for the Rover's cameras. "It's also exciting, historic and just plain cool to be able to observe eclipses on another planet at all."

Solar eclipses occur when a moon passes in front of the Sun, casting a shadow on the surface of a planet. Lunar eclipses are seen when a planet's shadow is cast upon its moon. 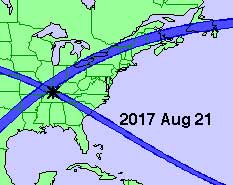 Image to left: Clear your calendar for August 21, 2017: a total solar eclipse will move across North America from Portland, Oregon to the coast of South Carolina. Click on the image for a map of all total solar eclipses for the years 2000 to 2025. Credit: NASA

Here on Earth, these events don't occur nearly as often as on Mars, but eclipses have been the subject of human fascination for as long as we've been around.

One of the first written records of an eclipse is credited to the ancient Chinese story of royal astronomers Hsi and Ho. Solar eclipses were believed to be the result of a large dragon devouring the Sun, so advance warning was required in order for the people to prepare bows and arrows to heed off the beast. Hsi and Ho failed to predict the Chinese eclipse of the 22nd century B.C., and lost their heads as a result.


Today's computer models incorporate over 7,000 factors when calculating the position of the Moon at any given time. As a result, our eclipse prediction is considerably more accurate than the days of Hsi and Ho.

Eclipses are still as rare as ever, though. Total solar eclipses only occur around seven times each decade, and their shadow is cast across only a small part of the Earth's surface. Lunar eclipses, while visible from almost any part of the night side of Earth, happen only two to three times per year, and only about a quarter of those are considered to be total eclipses.

Residents of Niger and the Ivory Coast will be among the lucky few on March 29, 2006. The next solar eclipse will cross directly over those nations as it passes from western Mongolia to the coast of Brazil.

Interested in doing a little eclipse chasing of your own? Visit NASA's Eclipse Web site for locations, dates and times for the next 2000 years of projected eclipses.
Matthew Cavagnaro
NASA's John F. Kennedy Space Center
› Back To Top