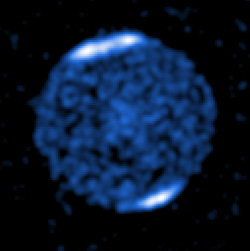 Like giant rings of luminescent luster, Jupiter's poles are often crowned with the most spectacular auroras in the Solar System. Thousands of times more powerful than auroras enjoyed on Earth, a possible cause for Jupiter's Northern Lights has been identified by NASA's Chandra X-ray Observatory.

Typically known for its deep-space observations, the Chandra X-ray Observatory's unique perspective provides a valuable way to explore Jupiter's polar auroras. “Spacecraft have not explored the region above the poles of Jupiter, so X-ray observations provide one of the few ways to probe that environment,” said Ron Elsner of NASA's Marshall Space Flight Center in Huntsville, Ala.

On Earth, everyday auroras are triggered by particles leaping from our planet's surrounding Van Allen belts and colliding with atmospheric air molecules. Spectacular shows like the famous Northern Lights develop when solar storms from the Sun bombard and overload the twin belts of trapped particles. These overwhelming showers cause an even greater exodus of particles and produce the wafting waves of shimmering light across the night sky. While auroras on Jupiter can occur in this same manner, the giant planet apparently has another way of producing the brilliant displays.

Jupiter is constantly fed volcanic particles by its continuously erupting moon, Io. An extremely strong magnetic field surrounds the planet as well. Scientists think the combination of these two features is the cause of the planet's stunning aurora formation. 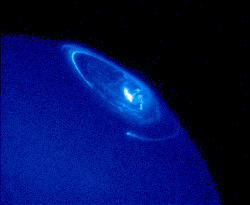 X-ray data from Chandra showed Jupiter's auroras active in the presence of electron-depleted atoms of elements like oxygen. If the particles departed from the Sun, their arrival should've been accompanied by an influx of protons. But measurements of Jupiter taken by the Hubble Space Telescope during an active aurora period showed little evidence of swarming protons. This realization led scientists to look for a power source closer to Jupiter's home.

Image to left: Data from images supplied by NASA's Hubble Space Telescope reinforce the newly identified origin of Jupiter's auroras. The images ruled out the Sun as a cause for the auroras.
Credit: NASA/STScl

NASA scientists think particles drifting outward from Io are captured by the magnetic field around Jupiter's poles. As the particles whiz through the field, they're subjected to 10 million volts of electricity, stripping them of most of their electrons. These highly-charged "ions" then slam into atmospheric gases, creating Jupiter's blazing polar auroras.

Chandra's determination of Jupiter's alternate aurora power source lifts the veil from their hidden origin. “These results will help scientists to understand the mechanism for the power output from Jupiter’s auroras, which are a thousand times more powerful than those on Earth,” said Elsner. It’s a discovery that diminishes the aurora's mystery, and yet somehow makes their glowing light all the more brighter.