President Bush has unveiled a new vision for space exploration, calling on NASA to "gain a new foothold on the moon and to prepare for new journeys to the worlds beyond our own."

In a speech at NASA Headquarters in Washington, D.C., the President said that the "new course for America's space program" would give NASA a new focus and clear objectives for the future.

"We do not know where this journey will end," said Bush, "yet we know this: Human beings are headed into the cosmos."


The President's plan for steady human and robotic exploration is based on a series of goals.

First, he said, America will "finish what it started," completing the International Space Station by 2010. Research on the station will be focused on studying the long-term effects of space travel on humans, preparing for the longer journeys of the future. After the Station is complete, the Space Shuttle would be retired, after nearly 30 years of duty.

Second, the United States will begin developing a new manned exploration vehicle, called the Crew Exploration Vechicle (CEV). The first craft to explore beyond Earth orbit since the Apollo days, the spacecraft would be developed and tested by 2008 and conduct its first manned mission no later than 2014. Though its main purpose would be to leave Earth orbit, the vehicle would also ferry astronauts to and from the International Space Station after the shuttle is retired.

"Our third goal," Bush said, "is to return to the moon by 2020, as the launching point for missions beyond." He proposed sending robotic probes to the lunar surface by 2008, with a human mission as early as 2015, "with the goal of living and working there for increasingly extended periods of time."

Bush said lunar exploration could lead to new technologies or the harvesting of raw materials that might be turned into rocket fuel or breathable air. 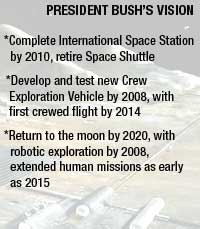 "With the experience and knowledge gained on the moon," he said, "we will then be ready to take the next steps of space exploration: human missions to Mars and to worlds beyond."


The president also announced the formation of a commission, headed by former Secretary of the Air Force Pete Aldrich, to advise him on the implementation of the new vision.

Bush closed by acknowledging the sacrifices of fallen astronauts and looking to the future.

"We choose to explore space because doing so improves our lives and lifts our national spirit," Bush said. "So let us continue the journey."
› Back To Top