Knowns and Unknowns in Exploration: Then and Now

Editor's Note: This is the fourth in a series of essays on exploration by NASA's Chief Historian, Steven J. Dick.

How realistic is the new space exploration vision to go to the Moon, Mars and beyond? In light of current problems in the world, and budget problems at home, some have framed the goal as undesirable, or even undoable.

At ceremonies marking the 35th anniversary of the Apollo 11 Moon landing on July 20, Neil Armstrong addressed the question of the "doability" of the current Moon, Mars and Beyond initiative. When President Kennedy proposed Apollo, Armstrong suggested, the "unknowns vastly exceeded the knowns." President Bush, he continued, has "challenged Americans to once more reinvigorate the exploratory nature of Americans that has served us so well throughout history. The unknowns today are far fewer than they were four decades ago." 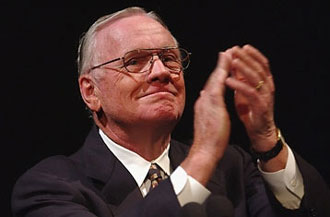 Image above: Armstrong salutes NASA employees during his remarks at a celebration of the 35th anniversary of the Apollo 11 landing in 2004. Photo credit: NASA/Bill Ingalls.

Armstrong's view of fewer unknowns today, even though the new space exploration vision includes not only the Moon, but also Mars and beyond, is grounded in history from many points of view, including science, technology and management. When asked about Armstrong's comments from a science point of view, Apollo project veteran Donald Beattie, who was in charge of the lunar science experiments, recalled the following:

In Beattie's opinion, there are no comparable unknowns in a return to the Moon today. As for Mars, over the last four decades, a flotilla of spacecraft has visited the planet, giving us an increasingly sophisticated view of what is in store when humans land there. For a human trip to Mars, Beattie believes the biggest unknown is whether there are dangerous pathogens. The Apollo experience will be useful, and astronaut return will probably be handled similar to Apollo -- isolation of material and astronauts until studied.

Moreover, prior to a human landing on Mars, NASA's planetary protection office has established strict protocols for a Mars sample return. Another concern is how long it will take astronauts to adjust after six months in zero G and be able to perform their tasks. Some data is available from Mir and other space stations since Apollo, and more data will be collected on the International Space Station -- a resource not available in the Apollo era.

In the technology arena, Armstrong's thesis also rings true. The Mercury, Gemini and Apollo spacecraft, along with their Russian counterparts, were the first human spacecraft ever designed, and they were built with numerous major unknowns. The new space vision will build on this experience to construct more multi-purpose Crew Exploration Vehicles. The Saturn V launch vehicle had to be developed by the von Braun team from wartime missile technology. The current space exploration vision will require new heavy lift launch capabilities, but we know orders of magnitude more today about launch technology than in the 1960s.

The Apollo Guidance Computer was the first to make use of integrated circuits, and NASA's use of ICs helped make the integrated circuit commercially viable. Eldon Hall, the leader of the hardware design efforts for Apollo Guidance Computer, vividly recalls how that computer was put together from scratch. And we all recall how Armstrong set down the Eagle on the surface of the Moon low on fuel, with seconds to spare as an overloaded computer called out error messages. Anyone with a desktop computer -- considerably more power than the Apollo astronauts had on their way to the Moon -- can testify that computer technology today is worlds away from the 1960s.

Historian Stephen B. Johnson has argued that the secret of Apollo was management, without which the technology would not have been effectively harnessed, and the science never deployed. Today we have much more experience with large-scale high risk technology projects, both on Earth (nuclear reactors) and in space (the International Space Station), and historians have studied how scientists and engineers created the systems management processes to coordinate large-scale technology development. No one wants the return to the Moon and the first human journey to Mars to be a race; that is another lesson of history. But we can learn much from the Apollo management experience. 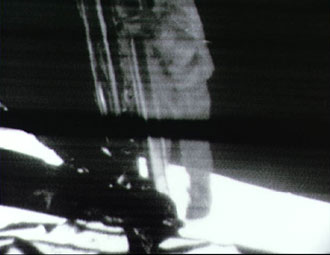 Image above: "One giant leap for mankind." Armstrong climbs down the lunar module Eagle's ladder as an estimated worldwide television audience of half a billion looks on. Photo credit: NASA.Click for larger image

There is a final insight from history. The Apollo era was undertaken in an era of intense cooperation with the Soviet Union, indeed, that competition was the primary driver. Today we are presented with an opportunity for international cooperation, having had the experience of the Apollo-Soyuz Test Project, Shuttle-Mir, and the International Space Station. The United States need not go it alone on the road to Mars. This not only makes the space exploration vision "doable," it also makes it a potential instrument of world peace through international cooperation.

All of this suggests that we are better prepared now to go to the Moon and Mars than we were to land on the Moon in the Apollo era. This is not to say that challenges do not remain across the board. As Armstrong said in his 35th anniversary remarks, "Substantial unknowns do remain. But we can learn their secrets, and find solutions to the problems they pose. Indeed, if there were no unknowns, it would not be exploration, and there is little progress, and little satisfaction, in solving easy problems."

Apollo today is almost universally seen as the greatest achievement of the 20th century, despite numerous other achievements ranging from computers to civil rights. The judgment of history is that we have no cause to regret the Apollo program, although it was costly and undertaken at one of the most tumultuous decades in recent world history.

There will always be problems in the world, and budget problems at home, and we must find ways to address them. Meanwhile I am willing to bet that history will also judge that we have no cause to regret a return to the Moon, and a human journey to Mars and beyond. No nation can long afford to sacrifice long-term goals for short-term needs.