The Importance of Exploration

Editor's Note: This is the first in a series of essays on exploration by NASA's Chief Historian, Steven J. Dick.

Is space exploration really desirable at a time when so much needs doing on Earth? It is an often-asked and serious question that requires a serious answer. One could present many arguments, from jobs and education to technology development and national security, for undertaking a robust space program. In an ideal world only one argument is necessary, though in the real world some would argue it is not sufficient. That argument is exploration, and that we should undertake it for the most basic of reasons -- our self-preservation as a creative, as opposed to a stagnating, society.

The concepts of "discovery" and "exploration" are frequently found throughout space literature, most recently in the new Vision for Space Exploration, billed as "a renewed spirit of discovery," enunciated by President Bush in January, 2004. The same concepts are emphasized in the Aldridge Commission's Report on the Implementation of United States Space Exploration Policy, titled "A Journey to Inspire, Innovate and Discover." The question "should we explore" must be seen in deep historical context, not in the context of present-day politics or whims. 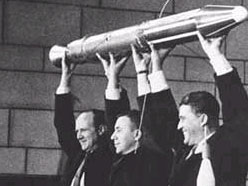 Historians have distinguished three great Ages of Exploration -- the Age of Discovery in the 15th and 16th centuries associated with Prince Henry the Navigator, Columbus, Magellan and other European explorers; the Second Age in the 18th and 19th centuries characterized by further geographic exploration such as the voyages of Captain Cook, underpinned and driven by the scientific revolution; and the Third Age beginning with the International Geophysical Year and Sputnik, primarily associated with space exploration, but also with the Antarctic and the oceans.

The United States both affected and was affected by the Second and Third Ages of Exploration, but the important point is that each of those ages of exploration was the product of specific decisions of certain cultures: the Europeans (and briefly the Chinese) for the first Age, the Europeans and Americans for the second Age, and the Soviet Union -- soon joined by the United States, then Europe and other countries -- for the third Age.

As historian Stephen J. Pyne has argued, "Exploration is a specific invention of specific civilizations conducted at specific historical times. It is not ... a universal property of all human societies. Not all cultures have explored or even traveled widely. Some have been content to exist in xenophobic isolation."

There is a value judgment in that last sentence -- that xenophobia and isolation are bad, but that they are in fact bad, I think, is borne out by history. The case most often cited for a societal decision not to explore -- with generally recognized bad effects -- is Ming China in the 15th century. You will find this case, for example, made in Bob Zubrin's books on Mars, and before that made by NASA Administrator James Beggs. Is it hype, or is it history?

The historical facts are quite clear. Historian Daniel Boorstin -- the recently deceased Librarian of Congress -- pointed out that in the early 15th century the biggest Chinese ships were up to ten times the size of Columbus's later in the century. While Columbus had 17 ships and 1500 men on the largest of his four expeditions, the Chinese Admiral Zheng He had 317 ships and 27,000 crewmen on the first of his six expeditions. Following a maritime tradition stretching back to the 11th century, from 1405-1433, these ships plied the seas of Southeast Asia, sailed to India, the Persian Gulf, the Red Sea and down the East Coast of Africa. (And yes, these are the voyages that Gavin Menzies addressed in his book 1421: The Year China Discovered America, although in my view that claim is not supported by good evidence.)

But what is important is this. Although Chinese state revenues were probably 100 times Portugal's, after the 1430s the Ming emperors had other priorities, and it was the Portuguese and other European countries that led the way in exploration. As Boorstin noted "When Europeans were sailing out with enthusiasm and high hopes, land-bound China was sealing her borders. Within her physical and intellectual Great Wall, she avoided encounter with the unexpected .... Fully equipped with the technology, the intelligence, and the national resources to become discoverers, the Chinese doomed themselves to be discovered."

In their recent world history, historians J. R. and William McNeill come to the same conclusions, and historians in general tend to agree that the Chinese chose poorly in the mid-15th century. By the 1470s, the McNeils wrote, even the skills needed to build great ships were lost. Boorstin called the withdrawal of the Chinese into their own borders, symbolized by the Great Wall of China that took its current form at that time, "catastrophic ... with consequences we still see today." The parallel with what is happening now, despite renewed attempts at space exploration, is striking. Some day historians will be writing about whether or not WE chose wisely, not only to make a proposal to explore, but also to fund it.