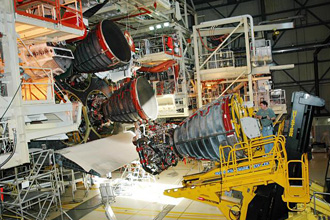 With the Space Shuttle's Return to Flight approaching, employees in one team at NASA's Kennedy Space Center in Florida are looking forward to seeing three of their babies -- the Space Shuttle Main Engines (SSMEs) -- at work for the first time in more than two years.

Image to right: In the Orbiter Processing Facility, the Hyster lift at right moves the third Space Shuttle Main Engine (SSME) into position behind Discovery for installation, a major processing milestone for
STS-114. Credit: NASA

The SSME program is managed by NASA's Marshall Space Flight Center in Alabama, and the Agency's Stennis Space Center in Mississippi is responsible for test-firing each engine. But at Kennedy, the engines are nurtured by a dedicated team whose members assemble, inspect and install the engines for space flight.

"Our role is to make sure the hardware is right when it's assembled, that it contains no defects and passes all retesting after processing is complete," says Susan Johnson, a quality assurance and systems safety manager for the SSME program. A 21-year veteran of Rocketdyne Propulsion and Power, Johnson also helped in preparing for the first Return to Flight in 1988.

Three reusable engines are installed on each Space Shuttle orbiter. Although they receive assistance from the Solid Rocket Boosters during the first two minutes of ascent, the three SSMEs combined provide nearly 1.5 million pounds of thrust throughout the vehicle's eight-and-a-half-minute climb to orbit. 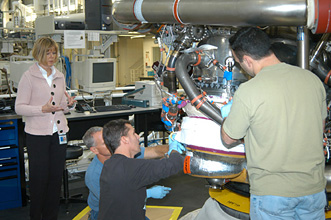 Inside Kennedy's 35,000-square-foot Space Shuttle Main Engine Processing Facility, up to six engines can be housed for processing at any given time. In addition to final Return to Flight preparations, the team is working on three engines for mission STS-121 and three spare engines.

Every day in the engine shop, "We take our engines through the paces when they're not installed in the orbiter," Johnson explains. This includes checking all systems, ensuring there are no leaks in the engines and verifying the software loaded into each engine's controller.

Each engine is made up of 50,000 parts. In the past, the engines were assembled in Canoga Park, Calif. After each flight, the Kennedy team would inspect the engines and prepare them for their next mission. However, Kennedy took over the assembly tasks in 2002, and in 2004 completed the first engine built entirely at the Center. That engine is slated to fly on STS-117.

"It was a huge milestone," Johnson says. "We started in April and finished in October, and hopefully we'll get to fly that engine pretty soon." 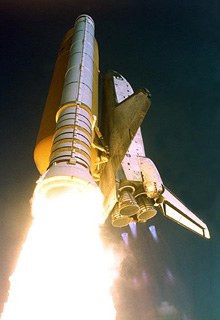 When launch day arrives, Johnson and the rest of the SSME team will hurry outside, eager to see their handiwork in action. They'll watch for specific milestones, including the start of the main engines.

"We start about six seconds before an actual liftoff. The engines have to come up to full speed before they lift from the pad," Johnson describes. "We look for the plume to make sure it's good and normal." Part of a healthy plume is the appearance of a bluish diamond, known as the "mach diamond," just behind each engine.

The team then excitedly waits for Main Engine Cut-Off (MECO) at the conclusion of the launch. "Most of the masses leave when the SRBs (Solid Rocket Boosters) are jettisoned, but we're waiting for that last MECO," Johnson says.

The ultimate goal of the Kennedy SSME team is to do its part to ensure the astronauts get to their destination safely. "We plan for that each day," says Johnson. "That's the exciting part of this program."
Anna Heiney
NASA's John F. Kennedy Space Center
› Back To Top