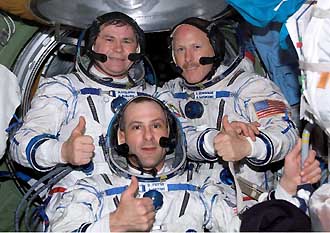 The sixth crew of the International Space Station returned to Earth just after 10 p.m. EDT on May 3, the first time U.S. astronauts have landed in a Russian Soyuz spacecraft.

Russian Mission Control reported at approximately 2:45 a.m. May 4 that the support helicopters reached the crew and all three astronauts were in good health. The capsule appeared to touch down about 276 miles from its planned landing zone.

The crew were expected to be taken back to the Baikonur Cosmodrome, launch site for Russia's space program, and eventually to the Star City training center outside Moscow.

While the Russians have been using the Soyuz for decades and American astronauts have flown into space twice before on the craft, NASA has never before put one of its own on a Soyuz for a landing.

The Expedition 6 astronauts, Ken Bowersox and Don Pettit, with their cosmonaut counterpart Nikolai Budarin at the controls, touched down in northern Kazakhstan. The crew left the Station after a successful, but emotional, five months in orbit. During that time, the Space Shuttle Columbia was lost and the Shuttle fleet was temporarily grounded.

Watching the progress of the landing from Russia's Mission Control center outside Moscow were the families of the crew and NASA Administrator Sean O'Keefe.

From undocking to landing, the crew's Soyuz trip lasted about three hours and 23 minutes. Just about everything that happens is automated; the crew has little to do but hold on tight.

About 15 minutes before the Soyuz lands, it begins to deploy a series of parachutes to slow its descent. Then, a mere two seconds before landing -- less than three feet above the ground -- six engines on the spacecraft fire toward the Earth to cushion the touchdown.

A landing in a Soyuz is generally bumpier than on a Shuttle, so Bowersox, Pettit and Budarin rode home in custom-built reclining seats formed to fit their bodies. The seats help cushion the landing and distribute the shock; the impact measures about four times the force of gravity, or four Gs.

In the past, cosmonauts have suffered some minor injuries -- bumps and bruises -- during a Soyuz landing, NASA flight surgeon Dr. Terrance Taddeo, says. But "nothing we're medically concerned about," he says.

The Expedition 6 crew also wore what Dr. Taddeo calls "anti-G" garments, which help to prevent blood from pooling in their legs when gravity kicks in.

Of course, after more than five months in space, any gravity will be a shock to the crew. Within minutes of landing, Russian space officials set up a portable medical tent and carefully took the Soyuz crew members to it, one-by-one. Bowersox, Pettit and Budarin spent their first moments back on Earth in special recliners, readapting to gravity's pull. About two hours later, they were scheduled to begin a trip to Star City, Russia -- outside Moscow -- where they'll spend at least 16 days undergoing medical tests and physical therapy.

Back on orbit, another first: the typical three-person Space Station crew scaled down to two. NASA and its International Partners have determined a smaller crew will be able to maintain the Station and the scientific experiments on board, while reducing the need for water and other supplies aboard the Station. For now, Russian Progress and Soyuz spacecraft will be the only means of ferrying supplies to the Station, and those vehicles have far less cargo room than the Shuttle. Once the Shuttle is back to flying, it will be able to carry enough supplies to support a three-person Station crew again.

The grounding of the Shuttle fleet affects the Space Station in another way; construction is on hold for now. Before the Columbia accident, the Shuttles were scheduled this year and next winter for a series of missions to complete America's portion of the International Space Station, known as Node 2.

That construction plan will kick back into gear as a first priority, once the Shuttles return to flight.

For more information on the mission, visit:http://spaceflight.nasa.gov/station.