New Eyes for Shuttle Launches
When the Space Shuttle lifts off from Kennedy Space Center, thousands of people watch it from nearby beaches, around the world on TV, and live on the Internet. As we prepare for return to flight the most important set of eyes will be the dozens of cameras located everywhere from right next to the Shuttle on the pad, to several miles up and down the coast of Florida.

At left: Viewed here is part of the tracking telescope that provides optical support for launches from KSC and Cape Canaveral. The telescope is part of the Distant Object Attitude Measurement System (DOAMS), which includes improved tracking cameras and long-range optical tracking systems that will be used to capture ascent imagery during the return to flight of the Space Shuttle.

At Kennedy Space Center, over $3 million in digital analysis equipment has been recently added, marking a major improvement in the ability of NASA to study images in the days following launch.

Following recommendations by the Columbia Accident Investigation Board, NASA plans to double the number of cameras used during launch to get a clearer picture of the Shuttle on its way into space.

On launch day, about two and a half miles north of the Pad, a technician will sit on top of a robotic camera, and use a joystick to track the orbiter as it heads into space. 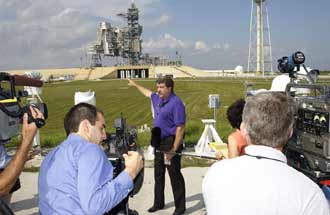 "The joystick is so sensitive, it evens responds to the heartbeat of the person using it," explains Bob Page, chairman of the NASA photography group.

At right: Robert Page, chair of the NASA Intercenter Photo Working Group, briefs news media on the improved tracking cameras that will be used to capture ascent imagery during the return to flight of the Space Shuttle. The press opportunity also included tours of the Image Analysis Facility in the Vehicle Assembly Building and two Playalinda Beach optical tracking sites at the Cape Canaveral National Seashore and the Merritt Island National Refuge.

These cameras will view every angle of the Shuttle during launch, and give engineers the pictures they need to make sure that the orbiter reaches space safely and without damage. But this isn't the end of the story. About an hour after launch, a dozen engineers will sit in a dark projection room and carefully examine videos taken of important parts of the Shuttle, such as the pipes between the external tank and the orbiter, which delivers liquid hydrogen and oxygen to the Shuttle's main engines. The high-resolution film will be processed in the days following launch and examined by teams at NASA centers across the country.