From the Ocean Depths to Deep Space 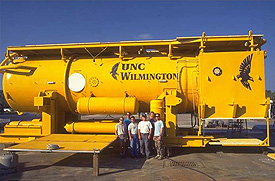 As the International Space Station floats around our planet like a ship on the sea, astronauts at home are taking to the Earth's oceans to prepare for missions into orbit and beyond. Through a unique partnership, future Space Station crews are learning from specialized training aboard a one-of-a-kind undersea laboratory called Aquarius.

Image to right: Aquarius was refurbished in 1997 by the University of North Carolina at Wilmington. Credit: NOAA and UNC at Wilmington.

Designed for ocean floor research, Aquarius is operated by the University of North Carolina at Wilmington for the National Oceanic and Atmospheric Administration. NASA astronauts use Aquarius to conduct NEEMO diving missions. NEEMO, which stands for NASA Extreme Environment Mission Operations, is a program designed to simulate life onboard the International Space Station and test new concepts for future interplanetary missions.

This year, NASA aquanauts participated in two NEEMO missions, the sixth and seventh of the project. Early missions were used to test the idea of using Aquarius to train astronauts, but more recent missions have added experiments to test advanced technologies that could be used for exploring other worlds. While on NEEMO 7, NASA "aquanaut" Mike Barratt called Aquarius a "diving and training paradise." 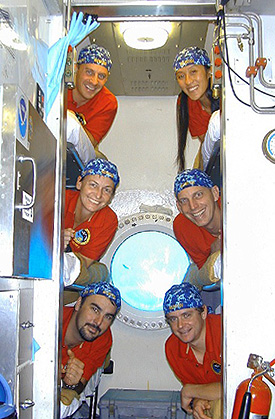 The Aquarius lab is submerged three and a half miles off the coast of Key Largo, Fla. From the surface, the only sign Aquarius is nearby is the lab's floating Life Support Buoy which provides communications, air and electricity to the undersea installation. Resting 62 feet below the buoy is the 10-by-45 foot lab sitting along the border of a vibrant coral reef.

Visitors and aquanauts dive down to Aquarius and enter through the open "wet porch." Unlike a space station or submarine, the lab doesn't require the use of an airlock to maintain the breathable atmosphere inside. That's because the air pressure inside Aquarius is kept equal to the pressure exerted by the outside ocean. With the pressures equal, the air prevents seawater from entering the lab and allows the aquanauts to easily slip out for dives.

Equalizing the air pressure between the ocean and Aquarius also means the aquanauts can dive for longer periods of time.

Image to left: Every bunk was filled aboard Aquarius for the NEEMO 5 expedition. The lab can accommodate up to a crew of six people for approximately 10 days. The lab is used by NASA and other organizations for extreme environment and ocean research. Credit: NASA

At 62 feet underwater, the pressure on a diver is 2.5 times greater than at the surface. Because of the increased pressure, nitrogen from breathing air begins to saturate the body's tissues. This condition normally demands that a diver swim back up to the surface within 80 minutes. If they don't, once reaching the surface, the nitrogen could bubble out of their tissues and cause an assortment of medical problems, known as "the bends." However, since the aquanauts live and swim at the same pressure, the nitrogen remains harmlessly inside of their tissues and allows them to dive for an extended amount of time. This is called "saturation diving."

Inside Aquarius' elongated capsule is everything the aquanauts need for a rustic, but comfortable 10-day science mission. At the opposite end of the lab from the wet porch are the lab's six sleeping bunks. Moving forward is the main living area. On one side of the room is a bank of counters, computers, control panels and communications equipment. On the other side is a table, sink, microwave oven and just about everything else that would be needed to spend a pleasant weekend at the cabin. Between the living area and wet porch is a space for setting up science experiments and conducting research.

While working inside Aquarius mirrors the Space Station, spacewalk-style dives outside are quite similar, too. 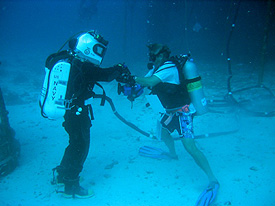 During NEEMO 7, aquanauts imitated spacewalks on other planets by wearing EX14 suits provided by the U.S. Navy. The special suits are designed for long-duration dives and can be weighted to mimic the gravity of the Moon or Mars. During their simulated spacewalks, aquanauts honed assembly skills by learning to use specially designed tools to build various structures.

Image to right: Aquanauts used U.S. Navy EX14 diving suits to simulate spacewalking during NEEMO 7. The innovative suits can be weighted to simuate the reduced gravity of places like the Moon or Mars. Credit: NASA

Far below the Atlantic ocean NASA's astronauts are harnessing the special benefits and challenges offered by the extreme environment of water. By working and living in and out of the Aquarius laboratory, future crews are getting a potent lesson in what it will be like to stay aboard the International Space Station. It's a lesson that will stay with them as they venture from the deep blue ocean into the vast cosmic sea.
Charlie Plain
NASA's John F. Kennedy Space Center
› Back To Top