Return to Flight Journal: Inside the Wing
Returning the Space Shuttle to flight is so important to Lisa Campbell, she's willing to spend 10 hours a day crawling around on her hands and knees to help make it happen.

Campbell is an aerospace technician with United Space Alliance at NASA's Kennedy Space Center in Florida. These days, she spends most of her time in a crawlspace deep inside the left wing of Space Shuttle Discovery, installing temperature sensors within the wing's leading edge. 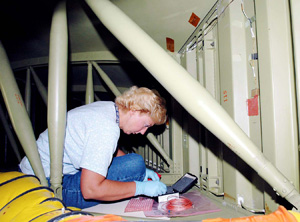 Image to left: Framed by a yellow ventilation hose and parts of the airframe, Lisa Campbell works in a tight space inside Discovery's left wing. Credit: NASA

The sensors are part of the Wing Leading Edge Impact Detection System, a new safety measure added for all future Space Shuttle missions. The system also includes accelerometers that monitor the orbiter's wings for debris impacts during launch and while in orbit. Sensor data will flow from the wing to the crew compartment, where it will be transmitted to Earth. Campbell leads the team installing the sensors on Discovery's left wing.

There are 22 temperature sensors and 66 accelerometers on each wing. Rather than wire and install each sensor one at a time, the work is being done in three phases. Technicians already have completed the first step, which involves bonding nuts to the wing at specific attach points. Now the crew is completing the second process, routing wires to each of these locations from relay boxes located on the sidewall of the main landing gear and the wing glove, the forward portion of the wing. Finally, they will attach the wiring to each sensor and fasten it to a nut already in place.

Campbell's job requires her to crawl through three different open sections, called cavities, to reach the wing's edge. She squeezes through small openings -- about the size of a clothes dryer door -- that provide access from one cavity to the next. 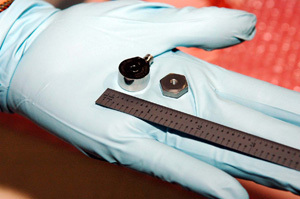 "There's a big cavity to start with, and then you go through a little hole and there's another cavity, and another hole and another cavity," Campbell explains. "It gets smaller and smaller as you go farther back. And there's a place all the way out to the end where, because there are two braces and a wall, you have to just reach through with your hands."

Image to right: In her hand, Campbell holds an accelerometer (left), which will eventually be installed on a mounting nut (right). Credit: NASA

If that sounds hard enough, bear in mind that she has to carry a light source and any necessary tools along with her while maneuvering around structural parts of the orbiter's airframe.

"The first week -- actually, the first two or three days I was in here doing the wiring -- I couldn't walk," she admits. "My legs hurt so bad, I could hardly stand up. At the end of the day, when I walked up the steps, they just felt like jelly. But I found some new tools to make it a little easier, like a little, teeny stool I can use in certain areas."

Campbell enjoys the work despite the occasional discomfort.

"We were in the wing the other day, and just from the angle, you could look along the belly of the bird, and that was just so neat," she recalls, shortly before venturing into the darkness of the wing again. "It was really neat to stand there and look at it from a different perspective."
Anna Heiney
NASA's John F. Kennedy Space Center
› Back To Top