Lending a Hand, an Arm...and a Boom
Todd Dugan's job is giving the Space Shuttle a hand. In fact, he helps with the whole arm. An advanced system technician with United Space Alliance, Dugan is part of the team that processes the Space Shuttle's robotic arm and its important new extension at NASA's Kennedy Space Center in Florida. 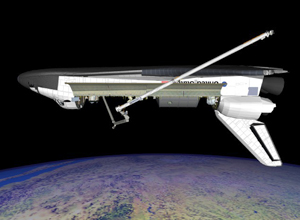 Image to left: This artist's concept depicts the Orbiter Boom Sensor System attached to the end of the Space Shuttle's robotic arm. A camera and laser on the boom's end are scanning the underside of the orbiter during a mission. Credit: NASA

The extension is the Canadian-built Orbiter Boom Sensor System, which is making its maiden flight on the Space Shuttle's Return to Flight mission, STS-114. The boom will attach to the end of the existing robotic arm, and a camera and laser on the boom's end will allow astronauts to check the orbiter Discovery's protective skin for possible damage.

"The reason it's important to see under the orbiter is because if there is a void or crack in the tile, or missing tile, or wing leading edge with a hole in it." Dugan explains. "It's one of the things we have to do in order to return to flight."

In late December 2004, the boom was delivered to Kennedy's Remote Manipulator System (RMS) laboratory in the Vehicle Assembly Building, where it began final checkout and testing. Finally, it was moved to the Orbiter Processing Facility for installation in orbiter Discovery's payload bay. 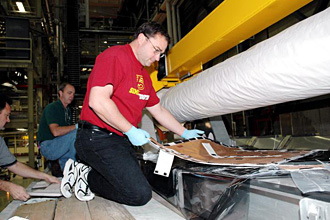 On a recent morning, Dugan and several colleagues clustered around the 50-foot boom as a photographer documented the only portion not already covered with blankets. Just a few feet behind them, Discovery rested in a cocoon of workstands and platforms.

Image to right: In the back transfer aisle of the Orbiter Processing Facility at Kennedy Space Center, United Space Alliance technician Todd Dugan prepares a Thermal Protection System blanket to be installed around the Orbiter Boom Sensor System. Credit: NASA

During a short break, Dugan explained the task that day involved putting the final blankets on the midsection of the boom to provide thermal protection from the heat and cold of space.

How did Dugan land such an interesting job? "Maybe just luck -- the right place at right time," he says. "I started out here as an orbiter integrity clerk, and sort of worked my way up."

After serving as a quality control inspector in the Launch Control Center's firing room and later in the Vehicle Assembly Building, Dugan learned of a vacancy in the RMS lab. "The technician who used to work (in the lab) retired and I applied for the job. I was the only one to apply for it, if you can imagine that! I got the job, and I've been doing this now for almost six years." 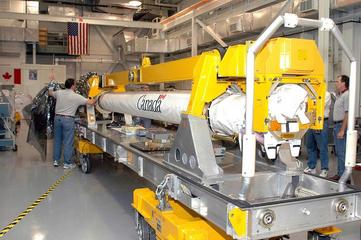 Image to left: Dugan removes the cover from the Orbiter Boom Sensor System shortly after its arrival at Kennedy Space Center. Credit: NASA

Dugan's favorite part is working directly with Space Shuttle flight hardware. He also enjoys working with so many people, including the Canadians who built the Space Shuttle's robotic arm and the new Orbiter Boom Sensor System. His work on the boom even required him to make two recent trips to Canada.

"Teamwork is very important, because you've got all these different professionals working together to get the job done," he explains. "You've got engineering, quality, technicians, management, and we're all trying to get the job done. But they all have different aspects of the job to do. Sometimes we butt heads, but at the end of the day we usually remain friends," he says with a grin.

The boom was carefully installed inside Discovery's payload bay Jan. 24.

But the culmination of Dugan's hard work on the Orbiter Boom Sensor System isn't the launch. The real payoff comes later, after Discovery reaches orbit, when his handiwork provides the astronauts one more way to make Space Shuttle flights safer than ever.