Expedition 7 Crew Members Welcome China to Space
When the crew of the International Space Station learned that they were not alone in orbit on Wednesday, Oct. 15, they quickly expressed their enthusiasm and offered congratulations. 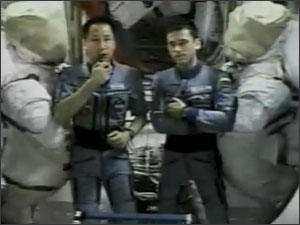 "First off, we want to congratulate them," Lu replied. "The more people that go into space, the better off we all are. This is a great achievement and good for everyone in the long run."

In Chinese, he later added, "Welcome to space. Have a safe journey."

"I would also like to say I love to have somebody else in space instead of me and Ed," said Malenchenko. "I also know this is great for thousands and thousands of people from China. I congratulate all of them."

Shenzhou - which means "divine vessel" in Chinese - began its fiery journey into orbit on Oct. 15 at about 9 p.m. EDT. Yang completed 14 orbits, landing in Inner Mongolia following a 21.5 hour flight.

Malenchenko and Lu are preparing to depart the Station on Oct. 27, concluding a six-month stay. They arrived at the ISS on April 28, 2003 following launch three days earlier from Baikonur Cosmodrome in Kazakhstan. Expedition 8 Commander Michael Foale and Flight Engineer Alexander Kaleri are expected to lift off from Baikonur on Oct. 18 and dock with the station on Oct. 20.