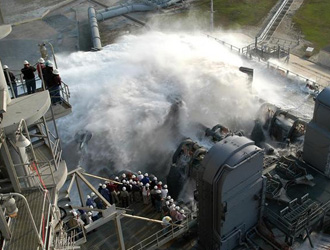 A roar resounded from one of the Space Shuttle launch pads May 7 as 350,000 gallons of water rushed across the Mobile Launcher Platform (MLP).

The torrent of water was released during a test of the water sound suppression system at Kennedy Space Center's Launch Pad 39A.

Image to left: Water soaks the Mobile Launcher Platform (MLP) on Launch Pad 39A at the peak of a Water Sound Suppression System test. Workers and the media (left) were on hand to witness the rare event. Click image for full size version. Credit: NASA/KSC

Center Director Jim Kennedy witnessed the test, performed for only the fourth time in Shuttle history, and was pleased with the results. "We can't fly without the proper water flow that provides the suppression needed," Kennedy said. "This is one of many important steps to get back to flight."

Officials conducted the test following upgrades to the system.

"We replaced six 48-inch valves that had reached the end of their service life," said NASA test director Steve Payne. "We ran through a systems test to make sure everything was in proper working order. We got the results back and everything seems to have gone just right." 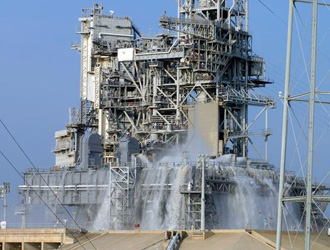 Image to right: Huge streams of water cascade down the sides of Launch Pad 39A. Click image for full size version.
Credit: NASA/KSC

The water system is designed to protect the Shuttle and its payloads from any damage that may occur from acoustical energy reflected from the Mobile Launcher Platform (MLP) during launch. The water is released seconds before ignition of the orbiter's three main engines and twin Solid Rocket Boosters (SRB), then flows through parallel 7-foot-diameter pipes to the Pad.

The system includes a 290-foot-high water tank filled with 300,000 gallons of water, and it empties in 41 seconds during a launch. Water pours from 16 nozzles on top of the flame deflectors and from outlets in the Shuttle main engine exhaust hole in the MLP at main engine ignition, which occurs approximately 7 seconds before liftoff.

The system was first installed at the pad when reflective energy from the top of the Mobile Launch Platform was causing minor damage to thermal curtains on the SRBs and putting stress on the wings. After adding the system, the sound pressure was reduced by half. 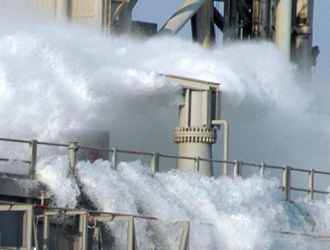 Image to left: This close-up of a "rainbird" -- one of 16 huge nozzles on the Mobile Launcher Platform -- shows the force of the water as it jets across the pad. Click image for full size version. Credit: NASA/KSC

The test did more than confirm the six new main system valves performed correctly. Judging from the loud cheers, it also brought even more energy to KSC's Shuttle launch and landing team.

"It's very exciting for us to do this type of exercise," Payne said. "We had a lot of our folks out here to witness this, and it was a good opportunity to get some training out of it. It was very motivational for us to come out here and do this type of work."