The Mobile Transporter (MT) runs along a railway on the outside of the International Space Station (ISS). Once completed, the railway will stretch about 278 feet along the outside of the Station. As it moves down the track, the train's top speed is about 1 inch per second. It is usually operated by flight controllers in Mission Control on the ground, but the Station crew could also operate it if needed. 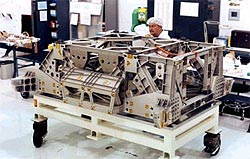 Image to right: A scientists looks over the Mobile Transporter in a clean room. Credit: NASA

The MT isn't a passenger train, since it only hauls equipment. The astronauts move along the railway during space walks by using special handcarts called the Crew and Equipment Translation Aids.

As part of the Mobile Servicing System, the MT moves a robotic arm so it can help build large structures. Originally, the robotic arm, called Canadarm 2, stayed in one place and could extend about 50 feet to work on projects. As the Space Station has grown, the reach of the robotic arm was too short to access all areas of the ISS. By being able to move the arm from one end of the Station to another, the astronauts will be able to use the arm on many more sections, including installing new pieces that will lengthen the railway. 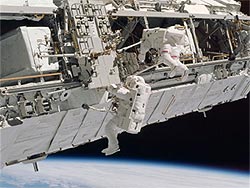 The transporter weighs 1,950 pounds and is built from thick aluminum and titanium. In space, though, a vehicle that large still risks floating off the tracks because of microgravity. To prevent the MT from separating from the ISS, the train is kept on the tracks using wheels under and above the tracks, similar to a suspension roller coaster ride at an amusement park.

The MT may be large, but it works with great precision and accuracy. Magnetic sensors help the vehicle stop exactly where it's supposed to - within 1/10-inch - so that all power sources and openings can meet in exactly the right location.

Even the most accurate vehicle can't do its job if something goes wrong, so the MT is built with double redundancy in almost every component. Double redundancy means that a backup system is in place to take over if the first method fails. 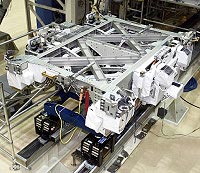 Image to left: An up-close view of the Mobile Transporter. Credit: NASA

The Mobile Transporter has double motors installed, so that if the first one fails, it's not stuck out there on the track with astronauts unable to make a repair.

So how can something that moves just 1 inch per second be faster than a speeding train here on Earth? It's all in the MT's location. Merely being attached to the ISS means that it's orbiting the Earth at the same speed as the Space Station: 17,500 miles per hour. The Silver Bullet, the fastest train on Earth, only travels at 186 mph!

To read the full text of the article, visit:
http://nasaexplores.nasa.gov/show2_articlea.php?id=02-046