A SAFER Way to Space Walk
Over 150 ISS assembly spacewalks will be performed to complete the International Space Station, and NASA is determined to make sure that none of the astronauts end up lost in space.

Spacewalks, or extravehicular activities (EVAs), are an important part of the assembly of the station. Unlike the Space Shuttle, the space station cannot maneuver to rescue a free-floating EVA crew member. 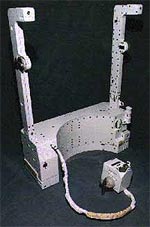 Image Right: SAFER looks like a jet pack, and has a control box that fits on the front of the space suit.

Among the ways to ensure safety is the use of a device called Simplified Aid For EVA Rescue (SAFER). Essentially a "life jacket" for spacewalks, SAFER is a self-contained maneuvering unit that is worn like a backpack. The system relies on small nitrogen-jet thrusters to let an astronaut move around in space.

Its relatively small size and weight allow for convenient storage. However, its size was achieved by limiting the amount of propellant SAFER carries, so it can only be used for a limited time.

That is why SAFER is intended primarily for emergency rescue, and not as an alternative to tools such as tethers and safety grips as a means of getting around the station.

EVA crewmembers are required to use SAFER whenever the shuttle is docked to station and unable to fly over to recover a spacewalker who has become un-tethered and can't get back to the airlock.

Astronauts control the SAFER device by using a hand controller attached to the front of their space suits. SAFER's propulsion, which is provided by 24 fixed-position thrusters that expel nitrogen gas, was first tested in 1994 by astronaut Mark Lee outside the Space Shuttle Discovery. 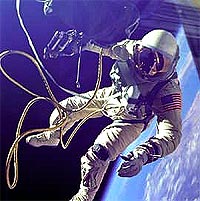 Spacewalking has come a long way since Ed White's first spacewalk in 1965. His space suit was smaller than modern day suits. A hose provided oxygen and communication lines to White from the space ship. White was able to move around outside, using a hand-held air-pressure gun, which quickly ran out of gas. The next time the device was used, it was hooked to a fuel tank on the ship to allow for a longer EVA.

Astronauts performed many EVAs during the Apollo program, mostly on the Moon. The gravity on the Moon did not require maneuvering units for spacewalks. Units were tested on Skylab, but only inside the space station. Among them were "jet shoes," a foot-controlled unit designed to leave the astronaut's hands free. Backpack and hand-held units were also tested.

The next spacewalks were not done until the Space Shuttle flew in the early 1980s. Shuttle astronauts used a jet-powered backpack on three Space Shuttle flights. It has not been used since.

SAFER is a lot like that backpack, but better. It is smaller, weighs less and can be used to save the crew outside the space station.

SAFER is a rare type of technology: the kind that is built with the hope it won't be used. So far, tethers, safety grips and the Canadarm2 robot arm have worked well to safely keep astronauts where they are supposed to be during spacewalks. But if they ever fail, SAFER will be ready.

To read the full text of the article, visit:
http://nasaexplores.nasa.gov/show2_articlea.php?id=03-050